If You Think the Mazda VISION COUPE Looked Great Outside, Check Out the Inside (w/ Video) 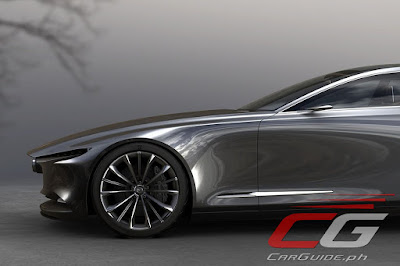 If carmakers had their way, cars of the future will have screens, screens, and even more screens. With the amount of information drivers (and people in general) devour, this may seem like a good idea; one could even say it’s inevitable. That is, unless you’re Mazda.

Continuing the company tradition of “defying convention”, the Hiroshima-based carmaker is about to do the opposite and strip away needless screens.

The Mazda VISION COUPE, considered to be one of the most beautiful cars at the 45th Tokyo Motor Show 2017, may have drawn worldwide attention for its long, sexy silhouette but its beauty extends far more than just to exterior styling. In fact, a peak into the VISION COUPE’s interior shows the bold direction Mazda wants its future interior designs to take.

Taking the Japanese architectural concept of ma (literally, “space”) as inspiration, the VISION COUPE wants occupants to feel Jinba-ittai (the feeling of oneness between car and driver) the moment they step in. To do so, the challenge was to create a cabin that embraces all of the passengers without any sense of confinement.

Through their research, Mazda’s designers figured out that while large screens and displays do communicate useful information to the driver, it also usually blocks their view. Not only does it limit visibility, but it also clutters up the cabin. With the VISION COUPE, Mazda removed needless displays and instead developed a see-through screen that projects the required information only at those times when it’s required. The driver just needs to touch the center console to bring up information (like a jockey stroking the neck of his horse, Mazda says). This creates an interior with great visibility without sacrificing the driver’s need to access information.

Further creating a sense of ma, the center console, door trim, and instrument panel all intersect without actually touching. Not only does this create a highly sculpted, three-dimensional form that cocoons the passengers, it does so without feeling claustrophobic. The design is also symmetrical enabling the driver to sense the central axis of the car at all times. The fact that it exudes a sense of speed is an added bonus as well.

Although the Mazda VISION COUPE is a far-off concept car that won’t see production, it’s said to show where Mazda is bringing its production vehicle design. Moving forward, the company wants to bring back a sense of elegance to automotive design, one that recalls the heyday of the 1960’s. They even call the VISION COUPE “new elegance”—a rather fitting label in this era of confuse-and-conquer design. If the future has less screens and more driving, then it’s a future worth heading into.