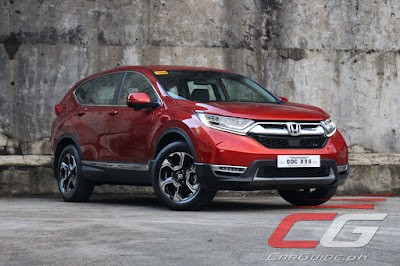 Compact sedans and executive sedans are dying because of one single reason: the compact SUV or crossover segment. Today’s crossovers can now match up with sedans when it comes to refinement, driving manners, and fuel economy while giving heaps of cargo capacity. People see them as truly multipurpose—the one vehicle that fulfills a wide variety of needs for everyone in the family. And among all the choices available out there, the one that fits that bill the best is now the 2018 Honda CR-V SX.

While other crossovers tended to excel in one or two attributes, the CR-V always managed to balance them all. For 2018, Honda has managed to tiptoe nicely on that balance while enhancing every attribute be it in terms of real-world performance, fuel efficiency, flexibility, and comfort.

The most peculiar aspect of the 2018 CR-V is Honda’s decision to fit a diesel engine under the hood. And though fitting an oil burner is a surefire way to sell locally, there are some apprehensions with the CR-V’s engine mainly because of its power output. One hundred twenty horsepower does sound meager, especially since the BR-V matches it; but what the spec sheet doesn’t tell you is how it actually performs.

Far and large, this is the biggest surprise of the 2018 CR-V. No other diesel is as smooth, linear, or easy to drive as this one. The best characteristic of the 1.6-liter i-DTEC is how it can manage to pull all this weight (1,732 kilograms) and feel zippy without needing to rev its heart out. It’s peppy, but in a gasoline sort of way. Instead of having the wind knocked out of you each time you jab the accelerator, the power is delivered gradually like a large displacement gasoline. Driven sensibly, there’s no discernable lag and it can carry 5 adults with little problem. There are some vibrations that make it to the seats and pedals, but nothing major. In fact, the engine’s behavior is reminiscent of BMWs, except it’s far quieter with a lot less rattle.

Along for the ride is a 9-speed automatic that’s well suited to the engine. It’s a lovely piece of work too, shifting seamlessly and quickly. It always hits the right gear at the right time, keeping the engine in perfect harmony. There are paddle shifters and even a Sport mode, but they’re unnecessary. The gearbox is so smart, it actually predicts a downshift a split-second before you need it. Oh, and the gear ratios are so well spread that the revs rarely go beyond 1,700 rpm. The result? 11.28 km/L even in the heaviest of traffic (average speed 13 km/h) and up to 23.33 km/L on the highway (average speed 63 km/h). During 10 days of mixed driving conditions, the final average is 15.22 km/L with an average speed of 28 km/h.

Honda’s made stellar efforts to make the CR-V feel like a truly effortless long-distance cruiser, but it still lacks in one important department: excitement. Ask for a shot of adrenaline, and the CR-V will likely look back at you with a puzzled look: “Huh? You want me to do what?” Yes, progress is there and overtaking is fairly easy, but the overall vibe from the engine won’t exactly light your loins on fire. Oh, and turning the ECON mode off doesn’t seem to make any discernible difference either.

The CR-V’s sensible, attainable performance fits excellently with the rest of the package. It’s truly a family-friendly choice.

For starters, it doesn’t feel so compact anymore. True to form, the CR-V has grown successively larger with each generation and the new one isn’t immune to this trend. In fact, it’s managed to sprout an extra row of seats that increases its maximum capacity to 7. Still, Honda designers have done a great job masking that girth. It’s shapely with muscular fenders and nicely detailed lighting elements front and back. More than once, some people commented that it looks like the “newest Subaru” or newest Mazda”, that’s got to be a compliment, right?

Inside, the 2018 CR-V is thoughtfully laid out. Although the design itself looks messy, the end result is one that’s plush, comfortable, and welcoming. It looks more expensive than its price thanks to the abundance of soft-touch plastics, plush leather, high-gloss piano black accents, and convincingly done matte faux wood.

From the driver’s seat, all the controls and dials are within easy reach and are clearly marked. The LCD gauge cluster make take some time to get used to, but ultimately, they communicate the right information at the right time. Even better is Honda’s decision to finally give its Display Auto system an actual volume knob instead of a fiddly touch sensitive slider. Oh, and it also incorporates Apple CarPlay and Android Auto as well. Although, it should be noted that the sound quality from the 8-speaker system could be better.

The biggest ergonomic challenge posed by the CR-V is mastery of its push-button shifter and not for the most obvious reason. Having to press buttons does take some getting used to, but admittedly, this becomes second nature after a while (even when you’re trying to make a three-point turn). What’s difficult to adjust to is the one-second delay the electronics needs to move from gear to gear. Sometimes, it makes you double check if you selected the right gear or not.

Despite being classified as a compact SUV, the CR-V’s interior space is actually quite good across all three rows. Without a doubt, the front passengers are treated the best with all the room they could ever need. The rest though will have to learn how to share. Space in the third row is largely dependent on how much legroom those in the second row would be willing to give back. They can opt to get economy class legroom to fit 7 adults or decide to go business class and amputate the legs of those in the back. Aside from seating flexibility, the CR-V is pretty clever too. There’s an abundance of storage spaces across all rows (including a clever re-configurable center console), half a dozen charging ports (2 12-volt sockets and 4 USB ports), and even a two-level rear package shelf.

On the road, the CR-V delivers an experience pretty much suggested by its name: Comfortable Runabout Vehicle. Riding on a new, stiffer platform, it has allowed the suspension to be tuned softer. As a result, it delivers a well-sorted experience with a firm, but compliant ride and controlled behavior. It also returns a very smooth ride with good straight-line stability. The all-around independent suspension filters out road imperfections to a tee while still being delightfully fun to toss around.

That said, don’t expect the CR-V to be a sporty crossover; that portion of the segment has largely been ceded to the Mazda CX-5 and the Subaru Forester XT. In fact, it’s more focused on the destination than on the next corner. With that, the variable-ratio steering may offer a feeling of sharpness, but it remains too artificial.

The SX Diesel variant is also equipped with Honda’s Real Time AWD system. Hardware changes allow more power to be sent to the rear axle, and you can monitor that in real time on the digital gauge cluster. There aren't any settings for the all-wheel-drive system: it’s always on, and automatically chooses which wheels to spin. In other words, it’s a set-and-forget system which makes perfect sense for the typical CR-V owner.

Together with the AWD system is a suite of safety technology collectively known as Honda SENSING. It contains systems such as collision mitigation, lane- and road-departure mitigation, active cruise control, and lane-keeping assist. Overall, it’s great but there are some parts of system which require some tweaking for the Philippine setting. The Forward Collision Mitigation, for example, gives far too many false alarms, even in its least sensitive setting. Thankfully, it can be shut off completely. This new version also comes with a Driver Attention Assist which senses if you’re tired or not paying attention (you’ll get a coffee cup icon on the dash reminding you to take a rest). Interestingly, the CR-V makes do without any blind-spot warning system. Instead, it gets LaneWatch which displays an image from the right side of the car on the central LCD screen.

The arrival of the 2018 Honda CR-V signals yet another nail in the coffin for traditional compact sedans and executive sedans. Not only does it offer true passenger car comfort, it does so while upping the game on flexibility and of course, fuel efficiency. Naturally, with a diesel engine and 7 seats, it’s aiming for the heart of the mass market—a segment also occupied by much larger PPVs or Pickup-based Passenger Vehicles. Of course, in the end, they offer opposing values. Those who aren’t into hardcore off-roading or towing (a.k.a. the vast majority of the population), will find the CR-V to be all the family car they’ll ever need. It’s now currently the best of the breed.