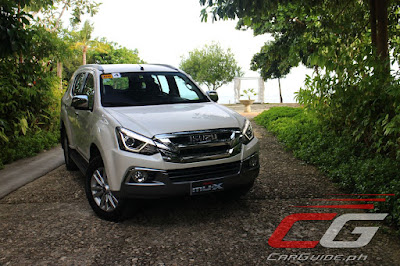 There’s a lot to love with the Isuzu mu-X. Compared to its other PPV (Pickup-based Passenger Vehicle) competitors, it’s largely unpretentious, but still very capable. Its no-frills, honest-to-goodness, all-practical attitude makes it a great 7-seater family SUV—one you’re proud to recommend to your family and friends. Still, pressured by increased competition, Isuzu has brought to table some improvements for 2018, some of which are designed specifically to make it a more attractive prospect to more buyers.

Isuzu Philippines says that around 40 percent of mu-X buyers are family-oriented women and because of that, a lot of the changes centered around to make sure the interior much more hospitable and upscale. Compared to the plasticky cabin of the 2015 model, the 2018 mu-X gets nicer appointments with lots of soft-touch contact points, better plastics (including the dash itself), and suppler leather seats. The instrument cluster is also new, featuring a customizable full-color LCD screen sandwiched between the tachometer and speedometer. There’s also three USB ports and three 12-volt power outlets for those needing to juice up their devices on the go. Oh, and there’s some blue ambient lighting on the door panels.

Cabin space has always been an asset for the mu-X thanks to its upright, square-cut passenger compartment. It’s a genuine 7-seater with best-in-class headroom and ample legroom across three rows. With all seats up, the cargo hold doesn’t offer much (235 liters), but fold the third row down and things become pretty decent (878 liters). The resulting luggage hold isn’t entirely flat, but the optional cargo box accessory makes it so, along with providing a nifty way to store items like an Early Warning Device or EWD.

The mu-X’s cabin is now much befitting of a vehicle in this price range and it’s actually a very comfortable place to spend traffic in. The lack of telescopic adjustment on the steering wheel may hinder smaller drivers from finding the perfect driving position, but that aside, the ergonomics are solid. The layout is practical and user-friendly with everything easy to locate and operate.

Together with the new cabin is Isuzu’s shift to clean diesel technology in the form of the 3.0-liter Blue Power engine. The 4JJ1-TCX engine is now Euro 4 compliant while also getting a slight power bump (177 horsepower from 163 horsepower) with torque remaining the same at 380 Nm. Though it generates less torque than even some smaller-capacity rivals, the Blue Power engine is never stressed. Sure, there’s a momentary lag in power before the turbo kicks in, but once it does, the momentum keeps going. It always feels willing, yet relaxed. And with torque available across a wider engine rev range, open road driving is made even more comfortable.

Joined to this engine is a brand-new 6-speed automatic. It’s a clever gearbox that shifts at the right time, always. It’s well-suited to the engine’s relaxed character in that it keeps the revs as low as possible during cruising. Plus, when it detects the need for spirited driving, it downshifts with immediacy. The resulting fuel economy during this particular drive came out to 13.2 km/L, or a 20 percent improvement over the old engine and gearbox combination.

Although the new engine has contributed to make the 2018 mu-X much quieter and smoother than before, Isuzu has also done work to wipe a few more decibels of unwanted noise, harshness, and vibration (NVH). This is done by adding more insulation in the floor, firewall, and windshield. Though the telltale diesel clatter is still audible, especially at full throttle, the wind and tire noise are surprisingly low. Even when driven through coarse surfaces such as loose gravel, cabin insulation is noticeably improved.

Though the body-on-frame mu-X still can’t match the on-road behavior of a car-based monocoque platform, it’s never a torture to drive. In fact, it handles quite tidily for its size. For sure, it pitches through tighter roads, but body roll is largely controlled. The brakes bite well and are confidence inspiring too. If there’s one complaint, it’s that the steering is too hefty and slow.

Communicating the changes this 2018, the mu-X receives a pleura of changes including a revised front fascia with new headlights, bumpers, and grille. Continuing Isuzu’s penchant for taking inspiration from nature, the mu-X’s bi-beam LED headlights and integrated LED daytime running lights (DRLs) are reminiscent of a bald eagle. At the back, it also gets a re-shaped bumper along with a LED lighting signature that’s made to look like eagle’s wings. Capping off the changes are larger, sportier looking 18-inch alloy wheels. In the grand scale of things, these changes are fairly minor, but much needed to keep things fresh.

All told, the 2018 Isuzu mu-X may not be game-changer. However, thanks to the various upgrades put in, it should attract more buyers who might seek the enhanced aesthetics and tweaked interior more than anything else. Still, dig deeper and the new powertrain along with better on-road behavior help make it excel in the hotly contested PPV segment. More importantly, priced at P 1,598,000 (for the 4x2 LS-A Blue Power), it continues to keep value-for-money as an all-important trump card. The Isuzu mu-X continues to be an unpretentious choice, but those in the know, will know. And they know that this mid-sized SUV is all they could ever need.