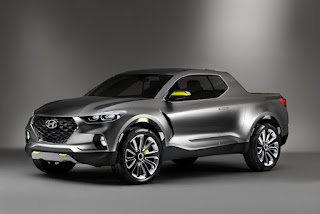 Hyundai has confirmed that a pick-up truck is still on a table after showing off the Santa Cruz Concept at the 2015 North American International Auto Show. However, a report by Motor Trend says that the production model will somewhat differ from the concept truck that took the world by surprise 3 years ago.

It must be remembered that the Santa Cruz Concept was a two-seater, two-door pick-up truck. But now, the website reports that with the Tucson compact SUV due for a full-model change (including a shift to a brand-new platform), Hyundai is using this opportunity to engineer it with a “four-door, five-seater” pickup truck in mind.

The report adds that the Santa Cruz won’t be going after workhorses, but instead will focus on buyers who want “a car-like ride and fuel efficiency, but like the added utility of having a pick-up bed.” Thus, the Santa Cruz will have a unibody platform and likely a modestly-sized gasoline engine.

Hyundai says they’re confident of moving between 50,000-70,000 units of the production Santa Cruz despite the fact that the Honda Ridgeline, its only main competitor, sees sales down 30 percent so far in 2018.

With the Korean brand undergoing an extensive product refresh, Hyundai says that the Santa Cruz may not see showrooms until 2020 at the earliest.