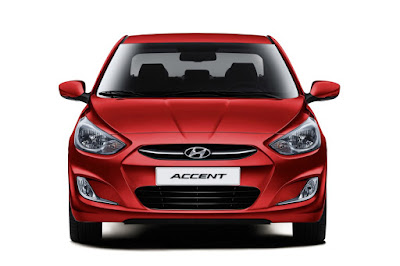 Hyundai Asia Resources, Inc. (HARI), the official distributor of Hyundai vehicles in the country bucks the TRAIN trend and actually grows passenger car sales for the first quarter of 2018.

Hyundai actually maintained its strong presence in the passenger car segment, growing it by 3.7 percent for the first quarter of 2018. With a total of 6,205 units sold, it contributed to more than two-thirds of HARI’s sales. Leading the pack is the Accent which moved over half of Hyundai’s total passenger car volume: 3,899 units.

However, light commercial vehicles slid 11.5 percent from 2,855 units to 2,526 units during the first quarter. This is attributed mainly to the slowing down of Starex and Santa Fe sales since these models are due for a refresh or full model change later in the year (the Santa Fe was previewed at the Manila International Auto Show).

Overall, HARI’s sales declined by 1.2 percent to 8,731 units from 8,841 units during the same period in 2017. It nonetheless makes Hyundai the third automotive brand in the country. Additionally, HARI’s March sales grew to 3,179 units which is a 20 percent jump from February’s 2,649 units—an indication of improving sales under the TRAIN law.

In a statement, HARI President and CEO Ma. Fe Perez-Agudo said: “Hyundai’s dynamism has shown no boundaries as it continues to beat the odds and hurdle any obstacles. First quarter sales remain firm and consistent with the trend in the industry, but we are expecting greater potential for the rest of the year. We are confident to continue this as we serve our customers with bolder, fiercer, unique and game-changing products and services.” 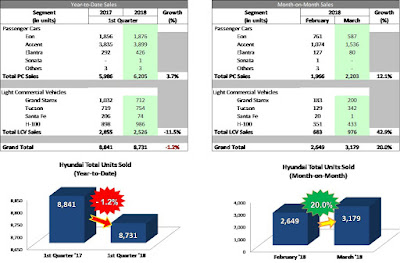