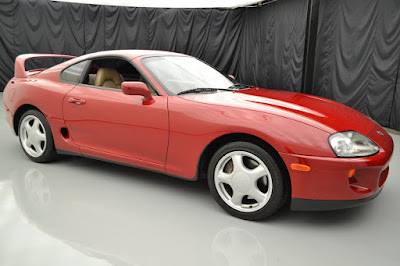 Sold on the website BringATrailer, this Supra now has the distinction of being the highest price paid for a fourth-generation Supra (at least on this auction site). Of course, in order to command such a high price, this Supra had to be unique and it is: it’s only run 7,000 miles (~ 11,200 kilometers) and is completely stock.

Thanks to movies such as The Fast and the Furious, unmolested Supras are pretty hard to find these days so this one could very well be the Holy Grail.

The car itself was leased back in 1994 only to end up purchased in 1999. Since then, it’s been stored in a climate-controlled facility as part of a private collection.

Finished in Renaissance Red, it’s free from any accidents or damage reports. It even runs on the very same Bridgestone Potenza tires fitted by the factory in 1994. Inside, it’s like a time warp of sorts. The black-and-tan interior is clean and even has the factory Toyota CD/cassette head unit.

If you’re keeping score, this 1994 Supra is already within modern Nissan GT-R category and that one has almost double the horsepower. It’s also worth noting that the all-new Supra—codenamed A90—will likely cost less. Still, some people will pay a pretty penny for some unmolested nostalgia.
at 10:37 AM

Email ThisBlogThis!Share to TwitterShare to FacebookShare to Pinterest
Filed Under: News, Toyota Supra