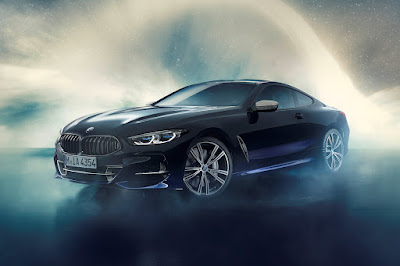 For years, watch makers have adorned the face of their timepieces with actual bits of meteorite and now that trend is extending even to cars with this special BMW 8 Series.

Customized by BMW Individual Manufaktur, the BMW Individual M850i Night Sky contains actual space rock which adorns the whole of the center console’s trim plate, the start/stop button, the gear selector lever, and the touch controller for the iDrive system. Bits of meteorite can also be found in the door sill finishers which also rock a “Night Sky” illuminated badge.

The distinct meteorite rock pattern is also replicated on the hand-stitched headliner and center console’s trim finishers. Thanks to a 3D printing process, BMW Individual was also able to mill the pattern into the disc brakes as well as on the mirror caps, front splitters, center mesh plate, and the surrounds for the air breathers on the front side panels. The car’s center console also shows an illuminated constellation of stars.

Now, because adorning a car’s interior with meteorite is a more daunting challenge than a 42-millimeter watch face, BMW Individual called on the expertise of researchers at the Max Planck Institute for Extraterrestrial Physics.

Like watch makers before them, BMW was drawn to using meteorite rock because of its unique structure which only occurs naturally in extraterrestrial objects. Called the Widmanstätten pattern, it’s strictly geometric pattern with its straight lines and has the appearance of ice crystals when polished or brought into contact with acidic compounds. The structure is the result of the metal alloy cooling down in an extremely slow process that cannot be reproduced on Earth.

Capping off the changes to the BMW Individual M850i Night Sky is a special paint that combines two color tones. A Black non-metallic was used as the base color for the body while a second coat in San Marino Blue metallic was then painted over it in a graduated effect from the bottom edge of the body up to the top of the wheel arches. Finally, three layers of clear coat with varying pigment particle sizes were applied to give the paint finish a remarkable sense of depth.