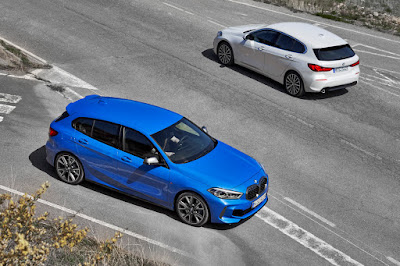 After more than 1.3 million examples produced in its first two generations, BMW is ushering in a new direction for its compact 1 Series: the move to a front-wheel drive platform that promises significantly more interior space without compromising the dynamic sharpness BMW is renowned for.

The result of a five-year development process, the 1 Series moves to a brand-new architecture features actuator contiguous wheel slip limitation or ARB technology. First introduced in the BMW i3 electric vehicle, ARB works in tandem the with stability control system to quell understeer—the common problem of front-wheel drive cars.

With the move towards a front-wheel drive platform, the BMW 1 Series gains massive interior space. The rear offers 19 mm more headroom, 33 more knee room, and 13 mm more elbow room than before. Meanwhile, the front passengers get an extra 42 mm more elbow room while the luggage space is up 20 liters to 380 liters. Fold the seats down and this increases to an impressive 1,200 mm.

The third-generation (F40)’s BMW 1 Series’s face features the newest interpretation of the trademark double kidney grille—made larger for greater presence. On the highest trim model, the classical bars have been replaced by a new mesh design. Towards the sides, it has a strong wedge shape while at the back, it has broad-set lower section and a tapering effect further up.

At launch, BMW will offer a choice of three- and four-cylinder engines. The three diesel engines and two gasoline units develop anywhere between 116 horsepower (BMW 116d) to 306 horsepower (BMW M135i xDrive). The top-of-the-line all-wheel drive variant dispatches the century mark in 4.8 seconds. Lower variants get a 6-speed manual as standard, while a 7-speed dual clutch is an available option. Moving up, the 8-speed automatic sees action in the high torque variants starting with the BMW 118d.

The all-new BMW 1 Series will officially launch at the Frankfurt Auto Show (IAA) in September 2019 with the start of global sale to start soon thereafter.