The Previous-Generation Toyota Hiace is Back...as a Mazda

Mazda may be best known for their passenger cars, but they did come up with a one-box van called the Bongo. It’s sort-of an oddball since it was based on a lot of things throughout its five-generation history being based off a Ford, a Mitsubishi, and a Nissan. Now, believe it or not, it’s based off a Toyota.

Now that Toyota has the all-new sixth-generation Hiace, this 2019, Mazda’s brand merry-go-round with the Bongo stops with the fifth-generation Hiace (H200). It’s very clear in these photos that it’s a simple badge job since the 2019 Bongo Brawny is every bit the previous-generation Hiace down to the grille, lights, and interior. KODO this van ain’t.

In the engine bay, it gets two Toyota-sourced engines (Skyactiv this van ain’t) and with that, there’s a choice between a 2.0-liter 4-cylinder engine making 136 horsepower and 182 Nm of torque or a 2.8-liter turbodiesel with 150 horsepower and 300 Nm of torque. Either way, both of these engines are mated to a 6-speed automatic. Full-time 4WD is an available option.

Unlike previous Bongo models, the 2019 Bongo Brawny is destined to be purely a commercial vehicle and as such, it emphasizes cargo carrying capacity over people carrying capacity. Mazda says its 3,000-mm wheelbase and maximum payload of 1,250 kilograms (with 3 people riding) should make it adept at handling most jobs, especially in the urban confines. 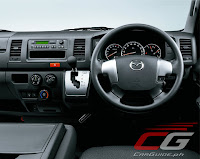 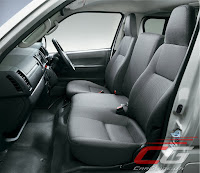 It doesn’t carry much in terms of comfort and convenience features, but at least the front seats recline fully. Also, it comes equipped not only with a stability control system, but with a collision avoidance package as standard. The Bongo Brawny features forward collision warning with automatic braking, automatic high beam, and lane departure warning. 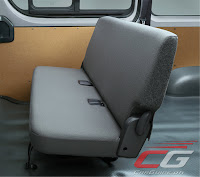