The 2019 Formula V1 Challenge Kicks Off This Weekend 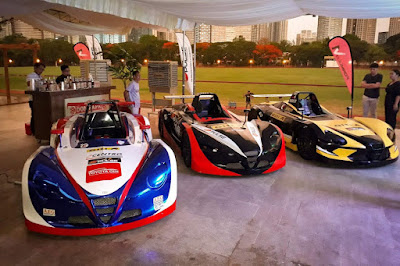 The Philippines’s homegrown single-seater race series is back for a second season. The 2019 Giti-Formula V1 Challenge kicked off the race calendar with an official launch.

Establishing itself as one of the highest forms of motorsports in the country, Formula V1 values sustainability by localizing the car to the Philippine setting. A collaboration between Tuason Racing and West Racing Cars Japan, these single-seaters are cost-effective and easy to maintain.

Coinciding with Tuason Racing’s celebration of 20 years in the business, the 2019 season is the continuing realization of JP Tuason’s dream. The CEO and founder shared, “When I was racing professionally a couple years back, I was lucky enough to be part of a racing generation that experienced the pinnacle of Philippine motorsports. I started with karting, graduated to circuit cars, and was given a chance to race formula Toyotas locally and level up to compete in Formula 3 internationally. I have seen talents such as Michelle Bumgarner and Marlon Stockinger who not only dreamed of being in F1, but did so with a fighting chance of getting in.”

“Sadly due to uncontrollable events, motorsports took a step back. But let’s stop looking at the past and move forward to the future, and it is bright.”

The 2019 Giti-Formula V1 calendar has three rounds, the first of which is slated this May 18-19, 2019 at the Batangas Racing Circuit (admission fee is P 50). Rounds 2 and 3 will be at the Clark International Speedway.

The overall series winner will get to win a race seat at the Suzuki Circuit in Japan.
at 11:38 AM