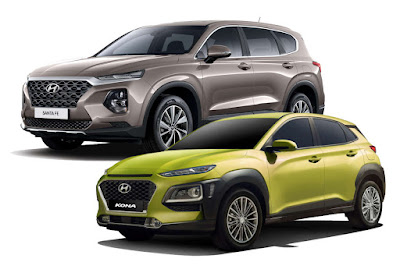 Critics and industry experts are all in love with Hyundai’s new design language. After scoping up two prestigious design awards—the iF Design Awards and the Red Dot Design Awards—three Hyundai models have been recognized once by the Good Design Awards for their “immense creativity and attention to form, function, and aesthetics.” These are the 2018 Kona, 2019 Santa Fe, and the Le Fil Rouge Concept Car.

Founded in Chicago in 1950, the Good Design Awards honor the yearly achievements of the best industrial and graphic designers and world manufacturers for their pursuit of extraordinary design excellence. It’s the oldest and the most prestigious architecture and design awards program organized worldwide and strives to create a revived awareness about contemporary design. The awards honor both products and industry leaders in design and manufacturing that have charted new directions and pushed the envelope for competitive products in the world marketplace.

The first-ever Hyundai Kona employs refined aesthetics with sculpted body forms and sporty contours for an athletic, bold, and striking appearance. Its distinctive design is reinforced by the car’s voluminous, aggressive body styling that emphasizes its well-proportioned, dynamic silhouette. A low and wide stance complements its profile, with a long wheelbase and short overhangs, ensuring sporty, nimble handling, in addition to delivering superior driving stability at highway speeds. Its masculine, protective ‘armor’ combines powerfully with the futuristic Composite Light design to create a high-tech look.

Meanwhile, the 2019 Santa Fe has a bold look that is enhanced by refined lines that reinforce the vehicle’s status in Hyundai’s SUV lineup. The face of the new Santa Fe is highlighted by Hyundai’s signature Cascading Grille and the very same Composite Light design—characterized by the LED daytime running lights positioned on top of the LED headlights. The exterior design also characterized by a powerful wide stance and an athletic body that makes a statement even from afar.

Finally, the Le Fil Rouge Concept Car is a reinterpretation of Hyundai’s 1974 Coupe Concept and marks the beginning of the Sensuous Sportiness era for Hyundai design. The Sensuous Sportiness design language will bring instinctive beauty, emotional value, and desirability to Hyundai vehicles. Sensuous Sportiness is defined by the harmony between four fundamental elements in car design: proportion, architecture, styling, and technology.
at 10:55 AM