Soon You'll be Able to Open Your Hyundai Using Your Fingerprint 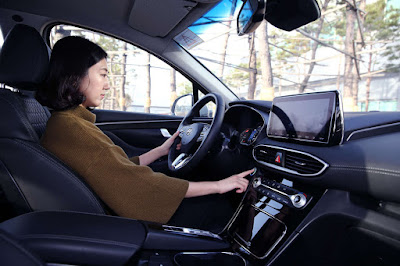 It may sound something straight out of a science-fiction movie, but Hyundai is about to make it reality. Beginning in the first quarter of this year, the Korean automaker will be the first one to offer smart fingerprint technology that allows drivers to not only unlock doors, but also start vehicles as well.

First to be introduced in the Santa Fe SUV in selected markets, the driver will just need to place a finger on the sensor located on the door handle to unlock the vehicle. The encrypted fingerprint information will be identified and delivered to the fingerprint controller inside the vehicle. The driver can also easily start the vehicle by touching the ignition that is also equipped with a fingerprint scanning sensor.

While this technology has been around for some time on smart devices such as phones, laptops, and even homes, Hyundai’s fingerprint technology will provide a customized driving environment for the driver. Matching information of driver preference with fingerprint data, the vehicle automatically adjusts seating positions, connected car features, and side-view mirror angles according to the driver’s stored preferences.

In the future, Hyundai also plans to further expand the application of the technology to allow the adjustment of temperature, steering wheel position, and many other features which will be tailored to driver’s preferences.

Hyundai says they have also addressed the security issues on the smart fingerprint technology. With capacitance recognition, which detects differentials in the electricity level in various parts of the fingertip, the fingerprint technology efficiently prevents forgeries and faked fingerprints. The technology’s chance of misrecognizing another person’s finger print as the driver’s is only 1 in 50,000 making it five times more effective than conventional vehicle keys, including proximity smart keys. Moreover, through real-time learning of fingerprints supported by ‘dynamic update’ system, the fingerprint system can continually improve its success rate.

The carmaker also says they plan to expand this smart fingerprint technology to other markets as well as continue to implement other customizable technologies to strengthen its position in the future mobility market.
at 3:50 PM