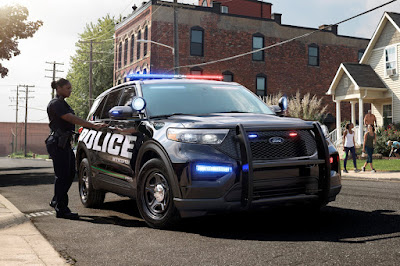 This may be the U.S. law enforcement’s newest ride, but it’s also everyone’s first glimpse of the all-new Ford Explorer.

Already accounting for nearly two-thirds of police vehicle sales in the U.S., Ford believes it has found the winning formula to keep law enforcers and the public safe. For law enforcement duty, the Police Interceptor Utility (the Explorer’s official designation) comes with a choice of three new engines: a 3.3-liter V6 (in both conventional and hybrid configurations) and a 3.0-liter EcoBoost. All engines are mated to a 10-speed automatic.

According to Ford, not only is this new model more economical than the previous Police Interceptor Utility, but it’s also faster. When equipped with the EcoBoost engine, this all-wheel drive cruiser reaches the century mark in less than 6 seconds.

Onto the civilian Ford Explorer, the all-new model is expected to make its global debut on January 9.

Like its police interceptor sibling, it will likely sport the very same engine choices as well as the same brand-new platform. This new platform underpins the luxury-oriented Lincoln Aviator and has been designed with electrification in mind. As such, the lithium-ion battery pack doesn’t impede cargo or interior room. It will also have rear-wheel drive with all-wheel drive as an option.

The Explorer is also expected to signal a new direction for Ford SUV interiors. It will gain a more horizontal center stack complete with a floating infotainment screen as well as, possibly, a fully digital instrument cluster.
at 5:57 PM