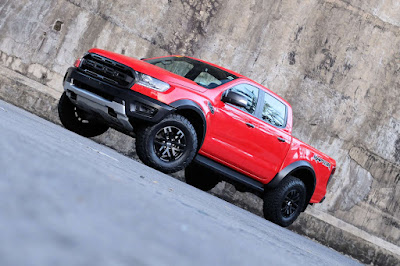 When Steven Spielberg gave Jurassic Park the popcorn treatment, he may have given an unforgettable role to the T-Rex, but the main villains were, without a doubt, the Raptors. Aggressive, agile, lethal—these are the film’s fearsome predators and at the mere sight of them, is enough to shake Jell-O out of a kid’s hands. Ford and their go-fast division, Ford Performance figured as much too and reckoned that there’s no name more appropriate to strike fear in the pickup truck segment. This is the 2019 Ford Ranger Raptor: the truck that’ll shake the Jell-O out of the hands of every single other pickup in the market.

Now, the Ranger Raptor’s ability to haul ass over any sort of terrain is well-documented, so this review will barely touch on that. Everyone knows its capabilities as a weekend escape machine. Instead, the focus here is on its everyday usability, of how it tackles the sort of situations its owners will come up against, perhaps on a daily basis. It’s time to see if this Baja conquering predator remains relevant as a weekday warrior.

Priced at P 1,898,000, the Ranger Raptor shares the Wildtrak’s twin-turbo engine and 10-speed automatic, and with that, makes the “lesser” Ranger seem like a steal at P 1,695,000. What the drivetrain doesn’t say though is that the extra P 203,000 buys something that can’t be replicated by any aftermarket outfit: a unique body and chassis with a coil spring suspension developed by Ford Performance.

Admittedly, it’s hard to appreciate the styling differences the Ranger Raptor has over the Wildtrak until they’re parked side-by-side. Almost every panel has been stretched out and made tauter. It’s aggressive from every angle, especially at the front where it looks like it can eat small cars for breakfast. The grille, with its big bold “FORD” lettering is unapologetic in signaling its intent to lord over other pickup trucks. It works extremely well with the pumped-out wheel flares and beefy BF Goodrich tires. There are some interesting bits here too like how the bumpers are actually mounted directly to the chassis and even come with recovery hooks rated at 4.6 tons at the front and 3.8 tons at the back.

As great as these design cues are, its main purpose is to fit in the Ranger Raptor’s secret sauce: the unique chassis that Frankensteins the standard Ranger’s with that of the Everest’s. Mind you, this is not a simple cut-and-weld routine. Ford Performance has done extensive work to increase the width (for those bespoke tires), incorporate strengthened components, shield critical drivetrain parts, and of course, shoe-in the Fox Racing Shox coilover dampers that adds 32 percent more front and 22 percent more rear suspension travel than the Wildtrak.

Different as the Ranger Raptor is with its aggressive exterior styling and capable chassis, from inside the cabin, it’s not that far detached from the Wildtrak. Sure, it’s undergone a sporty dressing as seen in the performance-themed gauges, sportier seats, thicker-rimmed steering wheel, and countless “Raptor” badges, but for the most part, it looks and feels like a high-trim variant of the Ranger; and that’s not a bad thing. It scores high in both quality and usability. Plus, there’s an ample array of storage spaces scattered around and getting to terms with the controls is easy.

Now, if there’s one area the Ranger Raptor could use a bit more differentiation, it’s with the engine. As it stands, it shares the same EcoBlue 2.0-liter twin-turbo 4-cylinder diesel in the Wildtrak. On paper, it packs a punch: 210 horsepower and 500 Nm of torque, but because of the extra 86 kilograms of weight, it merely feels adequate. Without a doubt, it’s a smoother and more refined unit than the previous Duratorq 3.2-liter inline-5, and that’s good if this were a Wildtrak. But because this is marketed as a performance vehicle, it could use more shove. As it is though, it’s competent, if a bit underwhelming in this role.

With peak torque occurring at a relatively narrow 250 rpm band (1,750 to 2,000 rpm), the Ranger Raptor relies on the wide ratio of its 10-speed automatic to keep itself moving at a brisk space, especially when driven in city confines. The gearbox itself is smooth and responsive, but because there’s just so many gears to choose from, the gearbox constantly shifts up, only to shift down after a second or two, and then shifts up again. Hearing and feeling the gearbox go up and down repeatedly in stop-and-go traffic is not only annoying, but tiring especially after long stints behind the wheel.

It’s only when the Ranger Raptor gets unchained and moves away from the city that it truly feels alive. On the highway, the sequential turbo does its magic and makes for quick overtaking maneuvers. The engine loafs along in 10th gear with only 1,600 rpm at 100 km/h improving its high-sped refinement while the cabin noise remains surprisingly low despite the aggressive tire setup and large side mirrors.

Driving around in such a behemoth sounds like a challenge, but in all honestly, it’s one of the easiest pickups to drive. With the exception of having to look for parking that can fit the Ranger Raptor, everything else works in its favor. Visibility is top-notch and the handling, braking, and ride quality are simply a class of their own. It’s a truck that keeps the driver entertained and the passengers, happy. It can easily take to the trails, but even in the city, it’s a plush-riding adventure machine. It even sails across the top of potholed and heavily-patched roads with such ease it feels like its laying down its own road.

Where the Ranger Raptor loses out to the Wildtrak is in safety. It manages to get things like 6 airbags, ABS with EBD, and even stability control as standard equipment, but the rest of the driver assistive tech didn’t make it to this Ford Performance Offering. Things like Adaptive Cruise Control, Lane Departure Warning & Lane Keeping Aid, Forward Collision Warning, Autonomous Emergency Braking, Active Park Assist, and Auto High Beam Control are no where to be found here. In the grand scheme of things, their absence isn’t a deal breaker, but it’s the sort of tech you’ve come to expect in a top variant Ford nowadays.

As a weekday worker and a weekend escape machine, the Ranger Raptor is a superb package. Not only is it capable of conquering trails, but it’s capable of covering vast distances on- and off-road in great comfort too. That said, the engine is a bit of a downer, not because it’s weak, but because the expectations are much higher for a vehicle named after such a ferocious hunter. Regardless though, the 2019 Ford Ranger Raptor manages to live up to its namesake and is now the undisputed apex predator of the pickup truck world.