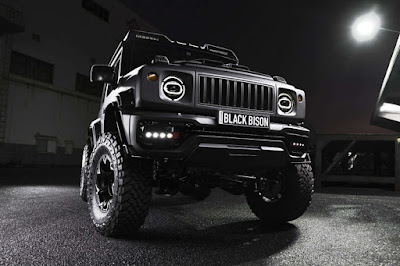 Japanese aftermarket tuner Wald just got their hands on the 2019 Suzuki Jimny and managed to transform it into one bad-ass SUV.

Dubbed the Suzuki Jimny Black Bison Edition, this special Jimny was showcased at the Osaka Auto Messe last week. Using the Jimny Sierra as its base, it gets a new front bumper with 4-piece LED lamp units, a new front grille with integrated headlight covers, a new hood with twin nostrils, aggressive looking wheel arches, a new rear bumper, and more LED lights on the roof. It’s also been lifted to fit in meaner looking all-terrain tires and shuriken-style alloy wheels.

Mechanically, it looks like Wald didn’t touch the 1.5-liter 4-cylinder engine which makes around 99 horsepower. However, it does get a side-exit exhaust similar to the AMG version of Mercedes-Benz’s G-Class. Top speed should still be around 145 km/h, though because of all this heavy mods, it’s likely to be a lot less.

Wald says they’re now in the process of mass producing these Black Bison parts for the all-new Jimny and should hit the market as a conversion kit soon.