Is the Nissan Terra the Best Mid-sized SUV for Women? 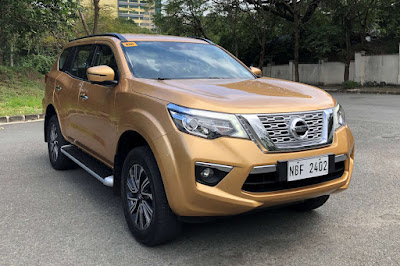 As Nissan’s flagship SUV in the Philippines, the Terra took a bite out of the SUV market dominated by the likes of the Fortuner and Montero Sport. Launching a 7-seater SUV was a first for Nissan, and was, for all intents and purposes, a make-or-break model. Luckily for them, they understood that they had to stand out and for that, they capitalized on two major factors: the mechanical refinement and the cutting-edge safety tech. And this is what this story’s about—Nissan taking a step back from the number crunching and focusing on the elements that matter to everyday road warriors every time he or she gets behind the wheel.

If there is one thing that Nissan is proud of, it’s the safety features developed the umbrella of Nissan Intelligent Mobility. Admittedly, the term itself sounds complex and techie, but in reality, these are features that work seamlessly keeping the car and its driver in check. In the Terra, for instance, there are stuff you find in other SUVs—blind spot indicators, lane departure warning, and sensors all around.

What’s more impressive is how Nissan took things up a notch with things like the Intelligent Rear View Mirror. In the Terra, the rearview mirror doubles as a rearview camera, giving the driver a wider, unobstructed view of the back. Compared to the typical rearview mirror, where you barely see more than just the vehicle following you directly behind, this tech enables drivers to see a portion of the lanes on either side as well.

If you’re one to prefer the traditional mirror view, a flick of the switch at the bottom of the frame will turn it into your usual rearview mirror. A word of caution though: in this untinted Terra, the camera view still tends to come through the mirror causing a slight “double vision.”

At any time, the shifter’s moved to reverse, the rearview camera automatically splits into 3 simultaneous viewing angles. The first is a direct view of what’s behind, the second gives the distance (in lines) between the car and any possible obstacle, and the last is a bird’s eye view in case there are obstacles you may have missed. The last one is what Nissan calls, Around View Monitor.

This feature’s been highlighted repeatedly on multiple occasions, but it’s only appreciated when put to the test in real-life scenarios. It’s been proven to be invaluable when it comes to parking in tight confines or even when making a two- or three-point turns in the middle of a busy street.

The Nissan Navara’s already made a name for itself for its plush ride and because the Terra’s based off that same platform, it comes as no surprise that the ride here is comfy; as comfy as a large sedan or crossover. The front passenger seat and the second row offers generous legroom and seating that was perfect for a family or barkada road trip. The ride’s smooth with none of the nauseating bounce that you’d normally expect from a pickup-based SUV.

Oh, and speaking about family trips, the Nissan Intelligent Mobility tech grabs most of the headlines, but equally appreciated is how engineers have been able to make accessing the third row very easy. How easy? How about being able to tumble down the second row with the flick of a switch from the driver or front passenger seat? The second row itself also slides front and back, giving those in the third row more legroom.

And on the subject of third row, the seats here aren’t just cushy enough for long trips, but when not in use, they actually fold flat giving owners the ability to fit large, bulky objects. They don’t tuck away into the floor completely, but compared to what other SUVs offer in terms of cargo space, the Terra’s one of the segment’s best.

Add to riding comfort, the Nissan’s also got Apple CarPlay and Android Auto across all variants thanks to its Blaupunkt infotainment system. Complimenting and encouraging drivers to stay off their smartphones (eyes on the road, please), the Terra’s got steering wheel controls and even pockets on either side of the dashboard to keep devices in place.

From the outside, the Terra is huge. To someone who’s more accustomed to driving a sedan or crossover, this may be intimidating at first, or maybe even at a second glance. Getting behind the wheel, it’s as imposing from the inside as it was on the outside. Suddenly, you’re taller, higher, and have a complete view of the road. Now, let’s pause for a minute and let that sink in. You have a complete view of the road. From almost every angle.

Compared to other mid-sized SUVs out there, the Terra offers the best visibility for the driver. There’s no difficulty seeing over the hood and with the generous greenhouse and comparatively low beltline, there’s no problem when mirror- or shoulder-checking. This makes changing lanes and keeping tab on other vehicles a cinch. There are hardly any blind spots on the Terra and in areas where they are, the blind spot indicators help.

The Terra’s behavior is actually comparable to a large sedan that’s positioned higher; it’s refined and quiet, striking a great balance in terms of control. The handling is familiar and easy, with enough solidity that keeps the vehicle grounded. Thankfully, the steering’s light enough to make even the widest turns feel easy for the driver. With a 190-horsepower 2.5-liter engine, it’s just as great on the highway as it is on the city streets. It provides unhindered power that doesn’t hold back. Power comes in gradually, but quickly meeting anyone’s desired pace. It’s an SUV that anyone, even women, can drive.

With the Terra, Nissan’s come out with a winner. Dubbed as its “game-changer” in the mid-sized SUV category, the Terra hit the right notes at the pertinent elements that would make it a good choice. It definitely has the features and the driver that makes anyone feel confident even during the daily drive.