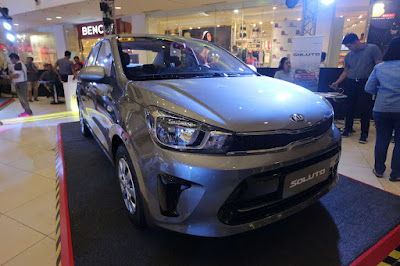 A lot of attention is paid on the Kia Soluto’s range-topping EX trim and for very good reason: at P 735,000, it has the features and specs that can shame others in its price segment and even some a bracket higher.

However, the arrival of its mechanical twin from another mother, the Hyundai Reina, has prompted people to look at the entry-level LX as well. With two essentially identical cars battling in the same price range (the difference is about P 25,000), does the Soluto justify its slightly higher asking price?

Well, it so happens that at the Kia Soluto’s Mindanao launch in Cagayan de Oro, there happens to be a base LX variant on display alongside the top-of-the-line EX. Taking a closer look, these are the exterior and interior differences between the two.

Outside, aside from the obvious aesthetic styling differences, not much separates these two models. Both run on the same 14-inch tires, steel rims with full covers, and both don’t even have front fog lights (they do both get rear fog lights though).

Inside though, it’s a very different story. It’s clear that Kia’s managed to stretch their peso and equipped the base-model Soluto with a lot more standard stuff. How much more stuff? Well, how about:
What’s more, the Soluto does feel like it’s got the edge when it comes to the fit and finish. For one, the fabric seats on the Kia feel plusher. Oh, and they’ve managed to avoid taking short cuts like omitting the trunk liner—something that can’t be said on the Reina.

When asked about whether Kia Philippines knew about the arrival of their new competitor beforehand, Kia Philippines’s President Mr. Manny Aligada said: “We knew it all along, but we are confident that with the Soluto, we’ve come up with a car that fits the desires of the first-time car buyer.”

Mr. Aligada goes on, explaining that cars remain an emotional purchase for Filipinos and along with it, a sense of pride in its ownership. “Kia is a brand that projects a youthful vibe, and we wanted to capture that by offering standard features that appeal to that segment. The fact that the first batch of Soluto owners in Cagayan de Oro are all young professionals says we’ve done our homework right.”

At the same time, Mr. Aligada also reiterates that purchases in the small car segment are predominately done under financing. “Seventy percent of buyers are expected to take on financing, and spread over a period of 3 to 5 years, the price difference between us and the direct competition is negligible.” True enough, doing some quick and dirty math, the Soluto is P 500 more per month.