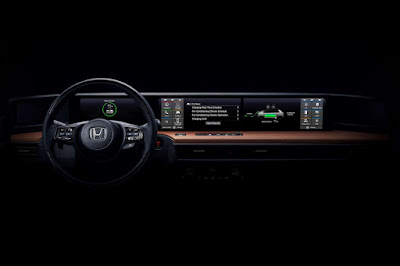 Honda has continued the tease of its first-ever all-electric vehicle, the Urban EV by showing off its dashboard. And we like what we see.

Set to be unveiled at the Geneva Motor Show next month, the dashboard is pretty futuristic with a full-width display screen with mirror cameras on both ends. It’s straight out of a sci-fi movie.

It’s worth noting though that Honda’s still calling this car a “prototype.” However, in Honda corporate speak, this isn’t far off from the eventual production model and this evidenced by the assembly line quality of the switchgear.

Zoom in and it’s clear that the Urban EV displayed on the all-digital dashboard doesn’t stray too far from the concept version. It does gain two rear doors (it’s now a 5-door), but cues such as the retro-inspired front-end and clamshell hood look to have made it to production.

Honda’s take on the electric vehicle is said to offer around 240 to 280 kilometers of range. Production is slated to start by the middle of the year.
at 4:11 PM