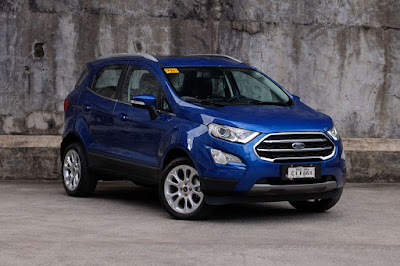 Let’s talk about the Ford EcoSport. When it first came out in 2014, it was a refreshing thing—a sub-compact runabout that fits well in the Manila urban jungle. It was, for all intents and purposes, the automotive equivalent of American Fast Food: tasty, if not particularly high-quality or nutritious. And just whenever the first-ever McDonald’s or if you prefer, Jollibee opens in a small town, people fell in line for this Ford; caught hook, line, and sinker with the promise that it’ll be a Happy Meal on wheels.

And for the most part it was. In a controlled setting—test drives around a parking lot or media ride and drives, Ford made sure to highlight the EcoSport’s strengths and downplay its weaknesses. Soon, though it was apparent that the EcoSport wasn’t living up to its namesake: it was neither economical nor sporty; it was something that looked great, but was engineered at the lowest cost possible (here’s looking at you, Power Shift). Well, at least it did manage to live up to being a Happy Meal on wheels, then.

Fast forward to 2019 and now Ford’s got a heavily-revised EcoSport on their hands. Eager to put its cheap past behind it, it’s managed to don a new suit, spent some time pumping iron at the gym, and read some self-help books along the way. Has Ford managed to re-create its sub-compact SUV?

Starting with what Ford got right, the 2019 EcoSport looks great. Gone is the catfish look and in is something that, at least, looks like a car. At first, the larger lamps and bigger grille make it look like it was poked in the ass, but because modern cars are all about looking “sharper,” “bolder”, and “dynamic-er,” it actually works. It looks even more rad in bold, bright shades such as this Blue Lightning, too. Odd thing though that the party only happened at the front, since the back is unchanged except for the “sharper,” “bolder,” and “dynamic-er” looking spare tire cover.

Inside, the EcoSport’s cabin has undergone an extensive rework and for the most part, it’s positive. Nitpickers will notice the inconsistency in the texturing (it actually alternates between the “Squareflec” design of old and something akin to leather), but almost everything else is new and improved. The upper dash, now finished in soft-touch plastics, is the perfect canvas for the ergonomically-placed controls and precise-feeling switchgear. Easily, the seats are the best new thing here: they’re wide and supportive in all the right places. Then, there’s the 8-inch touchscreen with SYNC 3—it’s snappy, intuitive to operate, and personally, still a benchmark to other carmakers on how to properly execute an infotainment system. Then, there’s the gauges which may look uninspired, but affords high levels of readability. At times, the steering wheel feels too big and the climate controls too small, but these don’t detract from the overall experience.

During this re-design though, there are some problems that Ford failed to address, while actually adding new ones in the process. Space for knick-knacks are still at a premium—limited to just the miniscule glovebox, a space in front of the shifter that can’t fit an iPhone, and the cup holders (assuming you won’t be using them for drinks). New for 2019 is a lidded console that doubles as an armrest. It’s actually decent, but it’s so flimsily-made you wouldn’t want to put anything of weight in there (resting your arms there is enough to shake the entire transmission console). Oh, and while we’re at it, why install a door lock/unlock switch where kids seated in the back can reach for. It doesn’t make any sense.

Then, there’s the cargo hold which is, just like before, tall but not particularly deep or wide. Given the EcoSport’s size, it’s actually fine, but what’s not fine is the side-opening tailgate that needs an additional 1.5 meters or so to open. And given it’s held in place by a hydraulic support rod (the same sort of thing you get in a vertically-opening tailgate), it only opens with one setting. So, despite the EcoSport’s miniscule 4.32-meter frame, you have to look for parking that can accommodate 5.3-meters just to get that rear door open. Mind you, that’s longer than a compact crossover or even a mid-sized SUV.

Previously, the EcoSport’s greatest flaw was that it never lived up to its name; so at least this one manages to go about 70 percent in. From not-economical and not-sporty, now, it’s sort-of-economical and sort-of-sporty, but I imagine that’s too long to spell out as a badge. The new hood features a larger power bulge and thankfully, there’s more of that bulge in the engine bay. After persistent clamors, Ford’s shoed-in the 1.0-liter EcoBoost now. Its power and torque figures aren’t far off from the revitalized 1.5-liter’s: 125 versus 123 horsepower and 170 versus 150 Nm of torque. But what matters is how the EcoBoost brings peak torque from 1,500 to 4,500 rpm. Together with the conventional 6-speed automatic, this combination has fundamentally changed how the EcoSport drives.

Compared to the previous drivetrain set-up where it’s all about anemic responses and/or jerky shifts, the 2019 EcoSport smoothens everything out. The setup is still far from perfect as the gearbox has the propensity to hunt gears, especially at low speeds (a combination of the heavy curb weight and boost-reliant nature of the engine), but at least it’s more usable and predictable in stop-and-go traffic. As expected of the 3-cylinder layout, the engine sounds gruff, aggravated by its constant need to rev high for boost, but it feels smooth and reasonably quick. Sadly, fuel economy still isn’t a strong suit of the EcoSport. After a 4-day drive, it just managed 6.02 km/L—30 percent lower than the previous 1.5-liter / Dual Clutch setup, and that’s with the idle start/stop system turned on.

With its small size, the EcoSport is supposed to enjoy the tight confines of the city, and most of the time it does. The steering is light and the suspension is able to soak up bumps that threaten to swallow the car whole. However, it’s let down by its mixed visibility. The large side mirrors are great, but those front quarter “port” windows are useless—they actually add more blind spots than reduce them. Well, at least the brakes (now with four-wheel disc brakes) bit well whenever a motorcycle emerges from the vicinity of the thick A-pillar. Outside the city though, it doesn’t feel as confident. The steering lightens up to an almost worrying degree at speeds above 80 km/h, and the tires have the propensity to break traction when pushed. Thankfully, the suspension remains fairly plush and stable, perhaps even more so than something like the Vitara.

When Ford introduced the EcoSport nameplate, it carved a niche all to themselves by introducing the first-ever sub-compact SUV in the market. Since then, it’s become a hotly contest segment with just about every new entrant benchmarking themselves against Ford’s smallest SUV. While that sounds great from the sales standpoint, from a purely product standpoint, that’s a pretty low standard to be measured against. It was affordable for sure, but wasn’t engineered well. With the 2019 update, Ford has given us the EcoSport they should have introduced 5 years ago—one that at least manages to sort-of live up to its namesake. It finally has the looks, the tech, and most importantly the drivetrain to keep up the Juans. The question now is this: will the Juans still be willing to give this EcoSport a second try or will the stigma of the previous version’s poor engineering be too much to overcome?