The Spirit of the Evo Lives on...in the Mitsubishi Xpander? 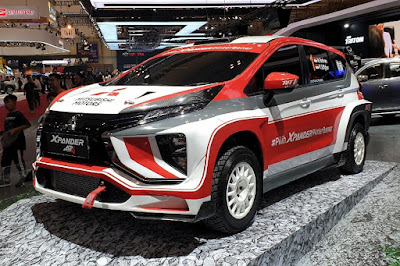 It’s been a while since Mitsubishi stormed a world rally stage backed up by a factory racing team, so it’s understandable that Mitsubishi Motors Krama Yudha Sales Indonesia (MMKSI) is doing something extraordinary to keep that racing spirit alive: they’ve transformed the Xpander into a rally car.

While Mitsubishi is keeping the Xpander AP4’s specifications a closely guarded secret, it will have to compete against the likes of the Toyota Yaris, Mazda2, and Suzuki Swift.

On paper, this may sound like a mismatch, but AP4 was designed to be a cost-effective level of rallying and thus, has strict regulations governing its drivetrain and minimum weight.

For example, AP4 rally cars may run a turbocharged 1.6-liter engine either from a series production engine, or if necessary, a 1.6-liter EP6 engine used in the Peugeot 208 and MINI Cooper. ECUs are standardized while transmission maybe either a sequential 5-speed gearbox or a manual transmission based on the production road car.

Mitsubishi is certainly mum on what engine the Xpander AP4 will use as it competes, but if it does use a turbocharged version of the 1.5-liter 4A91 (bored out to 1.6-liter to meet the regulations), this may (pardon the pun) boost the possibilities of seeing a hotted up MPV in the near future.

Regardless, the Xpander AP4’s driver Rifat Sungkar is confident in this rather unconventional rally car, “This car is indeed an MPV, but it has the chassis and character of the Mitsubishi Evo so I feel this car has the right character to be used as an AP4 rally car,” he said.
at 2:00 AM