This Toyota Prius May Not Require Any Refueling, Charging Ever 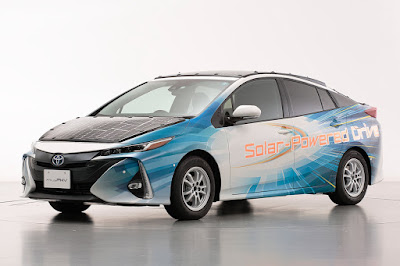 From the get-go, solar cells and battery-electric vehicles seem like a match made in heaven: you park a car out in the sun, and it gets charged; it lessens the need to put up too much charging infrastructure, benefiting people who have an 8 to 5 job. Thankfully, Toyota’s now putting that on a trial run with their Prius Plug-in Hybrid Vehicle.

Stemming from a project with the New Energy and Industrial Technology Development Organization or NEDO, Toyota decked out a Prius Plug-in Hybrid with high-efficiency solar cells from Sharp. Despite its colorful paint job, it’s easy to spot that any area that directly faces the sun—roof, hood, rear hatch door is covered in solar cells.

What actually makes this application unique is the amount of power it generates. Previously, Toyota has put in solar cells on its Prius PHV and its efficiency is at 22.5 percent, generating about 180 watts or 6.1 kilometers of cruising range. In comparison, these new Sharp high-efficiency solar cells have more than 34 percent efficiency and generate 860 watts or 4.8 times higher than the current setup. Best of all, it boosts cruising range whether being driven (by 56.3 kilometers) or parked (44.5 kilometers), theoretically removing the need to plug in on a day-to-day basis.

Currently, Toyota will conduct tests in various driving conditions in and around Toyota City in Aichi and in Tokyo. Toyota will then share the results with NEDO and Sharp. Ultimately, the goal is to create a new type of solar battery panel that’ll make it to mass-produced models in the future.
at 4:00 AM