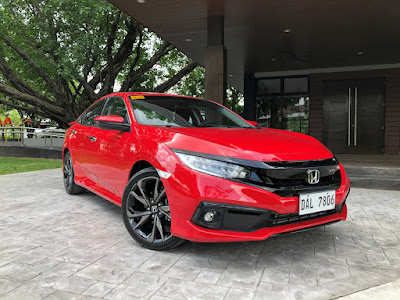 With all the hype that surrounded the Type-R in recent years, the standard Honda Civic seemed to have gotten lost in all the fanfare. Considering how, before the CR-V ever came along and became its top seller, the Civic was one of Honda’s finest. Admittedly, after growing up on the fifth-generation Civic, the succeeding generations waned in terms of aesthetic appeal, compared to their predecessors. It lost that sporty, racer-edged design formula that made it uniquely a Honda. That, however, has begun to change.

Let me go straight to the point—the 2019 Honda Civic RS was made to be in the spotlight, never mind its Rallye Red color. If you are familiar with Honda’s line-up, the new Civic now looks like it’s the same size as the Accord—the brand’s top-dog executive sedan. The body itself is wider and longer than the Civic of yesteryears. Without going into the numbers, it also looks planted closer to the ground atop the 18-inch Belrina Black alloy wheels. This gives the Civic RS a tougher-looking demeanor, especially with the black front grille and narrow headlights; it seems always ready to challenge anyone to a race. 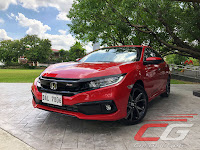 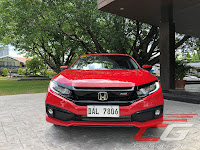 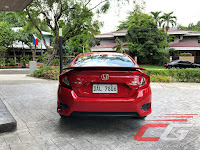 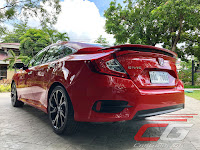 Unlike the modern, rounded profile that we get from cars of the same class, the design of the Civic RS continues along a seamless line that narrows out until the rear passenger windows, giving it an effortless wave that ends at the quarter panel and sweeps upward at the wing-type trunk spoiler. The spoiler gives it a lift that balances the slim body structure.

Much like its edgy exterior, the interior of the Civic RS remains consistent with a racing concept with the rubber-dotted alloy pedals and steering wheel mounted paddle shifters. Even the leather details are also done up in a striking red stitching that matches the exterior. As with classic Hondas, the seats feel lower with the lumbar portion angled slightly further toward the back. It’s worth noting that this may be alright for able-bodied people, but it may be slightly uncomfortable for the elderly to get in and out of this car. 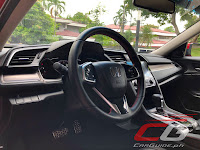 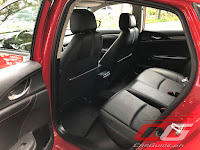 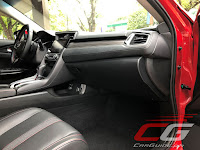 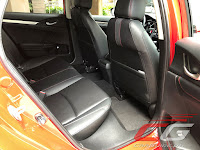 Once you’re seated in, it becomes an entirely different scenario. The nicely bolstered leather seats and thick-rimmed steering wheel gives you an instant rush of sportiness. The low seat height and outstretched legs also make you feel like you’re part of the car—elongated along the same line that stretches from the front to back.

As usual, Honda takes into account practicality and function despite the racy details. The positioning of the controls is all within accessible reach, and in familiar places. The infotainment thankfully now has physical buttons for the main menu and a knob for the volume making it easier to use. There is also enough room for at least two 16-oz tumblers in the center console cup holders—tucked away until you realize that it’s there. And like other modern Hondas, the Civic RS tucks away cables neatly thanks to a hidden console below the shifter area; this is a feature that all other car manufacturers should embrace. 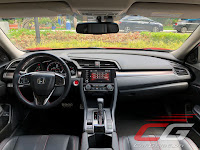 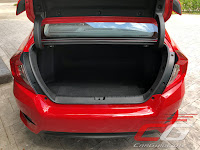 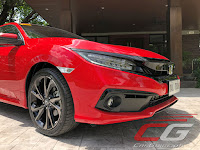 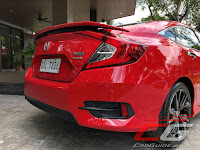 Moving to the back seat, the Civic RS could comfortable seat 3 adults with ample room. The outboard occupants can even cross their legs—it’s that big. The racy details at the front continue to the back, most notably the red stitching.

Despite the Civic looking like it’s made to race than carry cargo, it comes as a pleasant surprise that the trunk is actually pretty large. Don’t expect it to offer the same level of flexibility as an SUV, but with 519 liters, it can still fit two medium-sized luggage and a carry-on without any difficulty. 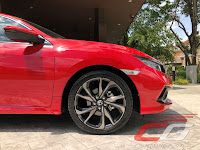 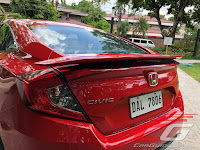 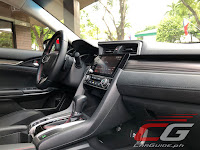 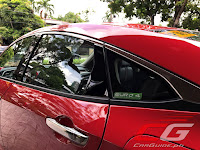 As a daily driver, the Civic has the road manners to match its looks. Even if you forget about the numbers, give the gas pedal a tap, and you’ll feel the surge of power running through the car. All 173 horses and 220 Nm of torque are accounted for. What’s even better is that the power doesn’t come out all of a sudden. It’s seamless and gradual—extremely usable whatever the traffic or road condition.

The steering can feel a bit on the light side at times, but it easily responds to driver inputs. The suspension too is supple, and the braking, smooth.

The launch of the Civic Type R in recent years may have downplayed the nostalgia of Honda’s well-loved sedan, tucking it away in the shadows. But after driving the 2019 Civic, I was reminded as to what made Honda one of the most popular Japanese car brands today. It’s well-made, well-designed, and properly-positioned in the market. The Civic has built Honda’s long-standing reputation locally, and while it waned the past few years, the new Civic brings the mojo back. It brings Honda’s racy attitude back to the streets and into the hands of customers who’ve been waiting for a comeback.

Words and Photos by Gen Tiu