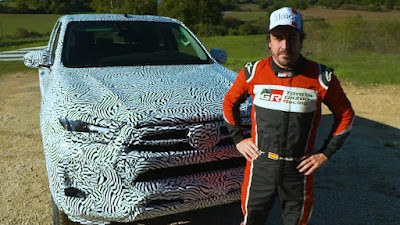 While training for the 2020 Dakar Rally last year in Spain, motorsport legends Fernando Alonso and Marc Coma were given a unique opportunity to test an early pre-production prototype of the new 2020 Toyota Hilux alongside the rally raid-spec Toyota Gazoo Racing Hilux which took the pair to the finish line of their first-ever attempt together at the Dakar Rally which is often considered as one of the toughest motorsport events in the world.

The latest iteration of the world’s favorite pick-up will feature a new and powerful 2.8-liter powertrain and new suspension geometry to continue to uphold the nameplate’s reputation of legendary Quality, Durability and Reliability.

Following the test on a challenging gravel and dirt special stage designed for rally cars, Fernando said: “The Hilux is an icon and I’ve always been a fan of this car. When I first saw the New Hilux, it looked spectacular. It was nice to test the new car in a difficult environment, on a rally stage, and to push it to the limits. The new 2.8-liter engine behaves really well and the new suspension feels great. Even if you push the Hilux to the limit, the comfort is still there. I think the New Hilux can be invincible.”