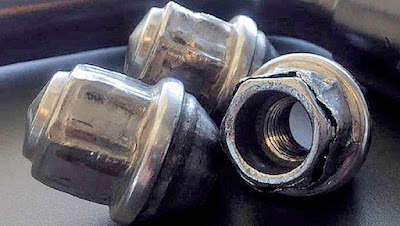 A reader sent in an anonymous tip saying that Ford vehicles may be suffering from swelling lug nuts. The issue, the reader says, can potentially make replacing a spare tire impossible, and that it could also pose a safety issue. What’s happening here?

People who’ve sought a class-action lawsuit against Ford says the problem lies in the design of the lug nuts itself. It’s a two-piece design with a steel core and an aluminum or chrome cap. Over time, complainants say, dirt or moisture can work their way under the cap creating corrosion. In the worse possible case, it can cause the wheel the lug nut is holding on to, to fall off. Under less dire circumstances, it could make removing the nuts difficult and time-consuming.

Complainants accuse Ford of using an inferior part design to save on manufacturing cost. However, two-piece lug nuts are now fairly common in modern automobiles because they’re designed to provide an increased clamping force while maintaining optimized torque/tension.

For their part, Ford says the problem isn’t with the lug nuts themselves, but with technicians who use wrong-sized wrenches or incorrectly-calibrated tools to work on them. Excessive torque during lug nut installation or removal can also cause them to “mushroom.” Applying excessive force to the lug nut exacerbates the problem, and may cause the cap to detach.

The use of power-operated torque wrenches or air impact tools to remove or install lug nuts may also be a potential complication. If the socket doesn't fit correctly, it can deform the “softer” aluminum cap. Such tools, says Ford, are not as dependable as properly-calibrated handheld wrenches such as a good, old breaker or cross wrench.

Ford goes so far to say that lug nuts replaced by a shop other than a Ford dealership may be incorrectly installed.

Regardless of who’s at fault, distorted caps or swollen lug nuts are a potential hazard, and is a serious safety issue. Whether the problem has to do with the construction of the lug nuts themselves is only something Ford can answer.

Nevertheless, here’s what you can do to prevent a potential problem: First, avoid using power-operated wrenches to remove or tighten lug nuts. Service centers who use power-operated wrenches should go back to using properly-calibrated handheld wrenches when removing and installing lug nuts. Second, follow the recommended torque rating to make sure the lug nuts haven’t been overtightened. As mentioned earlier, these lug nuts are designed to “clamp” at a particular torque—overtightening them will do nothing.