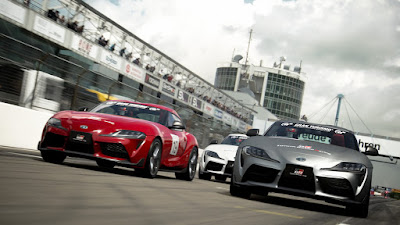 Toyota Motor Philippines announces a new racing series to replace the Vios Racing Festival, at least for this year: the GR Supra GT Cup Asia – Philippines. Oh, and it will be held virtually as part of their new e-sports program.

This move was brought about by the latest situation where safety is of highest concern to everyone and mass gatherings like physical races are foreseen to be limited in the coming months.

“Safety of our customers, employees, and fans are always at the top of our priority,” expressed TMP President Atsuhiro Okamoto.  “But we also recognize the value of waku-doki spirit in everyone!  This is a great way to sustain the excitement of motorsports program in the Philippines in a safe environment.”

The GR Supra GT Cup Asia – Philippines, an e-racing event under Toyota’s Gazoo Racing motorsports program, will be fully held online and will be open to the public, ages 18 and above.

“Finally, Toyota fans can participate in our sports program at the comfort and safety of their own homes.  We also expect this activity to reach a wider and younger audience, based on the profile of gamers.”  The online e-race, using Toyota’s legendary sports car icon, the GR Supra, is expected to start in July 2020.  Winners of the e-race will get a chance to participate in the regional finals, the GR Supra GT Cup – Asia.

E-Sports in the Philippines have grown in popularity over the years. The addition of E-sports programs in various international competitions, producing Filipino medalists, have further legitimized the sport.

The GR Supra GT Cup Asia – Philippines is Toyota’s fun and safe alternative to holding the country’s number one motorsports program, The Vios Racing Festival. Usually held in 3 legs from the second to the fourth quarter, the current situation makes it very challenging for Toyota, the racings teams, the drivers, and public spectators to do this physical event.

“We look forward to a better 2021 Vios Racing Festival Season where we can go back to the tracks again and feel the heat and excitement.  But for now, we invite everyone to join the GR Supra GT Cup Asia E-Sports Program,” Okamoto concluded.