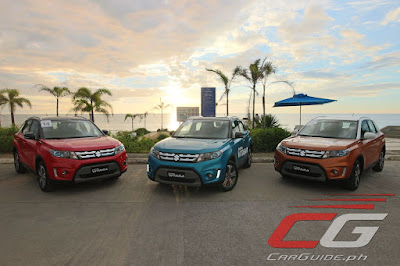 When the original Suzuki Vitara first appeared in the market close to 30 years ago, people bought one mainly as a fashion accessory, despite it being a genuinely capable off-roader. In the three decades and two Vitara generations that followed, Suzuki continuously shifted towards family-oriented buyers who wanted a utilitarian edge. The latest one, the fourth-generation Vitara, completes that transformation. Chucking what’s left of its off-road credentials out the window, the all-new Vitara is now a purely urban, on-road sub-compact crossover. And that’s all for the better.

Realizing the insatiable demand for small crossovers, Suzuki had a stroke of genius by deciding to graft a chunkier, taller riding body on its existing SX-4 platform. It worked. Filling it with nods to previous Vitara design cues such as the clam shell hood, faux fender air vent, and wedge-styling, it’s managed to look tougher next to market rivals that include the Ford EcoSport, Nissan Juke, and SsangYong Tivoli. An even more pleasant surprise is how Suzuki’s managed to load the Vitara up with features normally reserved for expensive SUVs such as automatic LED headlights, LED daytime running lights, a panoramic sunroof, and even 17-inch polished wheels with Continental tires.

The surprise continues inside with a pleasantly modern, well-executed cabin. Though the Vitara could use plusher plastics (and more solid sounding doors), at least everything feels neatly assembled and durable. All of the controls are intelligently laid out with some nifty design details thrown in such as the analog clock.

With a driver’s seat that moves 6 ways manually and a steering column that adjusts for both height and reach, finding a comfortable driving position is quite easy. The seats, executed in a combination of leather and suede don’t just look good, they’re functional too: they keep you in place during cornering. Interestingly, even at the lowest setting, the seats are perched high. This gives a commanding view of traffic (all around visibility inside the Vitara is great), but perhaps at the expense of a sporty feel.

Rather unexpected is the Vitara’s better than most interior space, despite its small exterior dimensions. It’s already a given that those in front will have little problem with generous shoulder and leg room (the panoramic sunroof does rob some headroom for taller drivers), but those in the back will also enjoy decent knee room as well. Yes, the panoramic sunroof robs passengers of usable headroom (especially for the rear center passenger), but squeezing in four passengers (five is a bit tight) is no problem. There’s also an abundance of storage space including a decently sized cargo hold.

In general, no one expects a value-oriented sub-compact crossover to handle well, but thankfully, the Vitara has thrown in a rousing performance. Being the maker of the Swift, Suzuki’s already got the reputation when it comes to making nimble small cars and the Vitara isn’t far off that mark. The extra weight (1,120 kilograms) and higher center of gravity (185 millimeters of ground clearance) means it tends to tip more through corners, but it still clings nicely even when you drive it spiritedly. The steering itself is light in both effort and feel, but it weighs up nicely on the highway.

On the flipside, the Vitara’s ride is on the firm side. Though the suspension itself is well-damped, big bumps do find their way through the cabin. And though it’s not tiring to drive for long distances, there’s some audible tire noise. There are also some shimmies and rattles in the cabin that make it feel less solid than it really is.

Powered by a 1.6-liter gasoline engine with 115 horsepower and 156 Nm of torque, Suzuki says that the Vitara reaches the century mark in 11.5 seconds, which is pretty good in itself. It takes a stronger prodding on the throttle pedal to poke the engine to life, but once it does, it settles into a nice, even rhythm. The engine itself is rev-happy and not too coarse even at full song. But as good as the engine is, the Vitara’s secret sauce is the 6-speed automatic. The well-spaced ratios not only promote acceleration, but fuel economy and quietness as well. During this drive to La Union, it averaged an 18.87 km/L figure (average speed of 52 km/h). For sportier drivers, the Vitara has paddle shifters, while those wanting extra comfort can rely on the cruise control with a speed limiter function.

For all of the Vitara’s strength in design and on-road performance, the reason why it’s so talked about is because of its high value-for-money quotient. It ticks all the right boxes when it comes to exterior (LED headlights, LED daytime running lights, 17-inch alloy wheels, panoramic sunroof), interior (leather/suede seats, 10-inch Android-based infotainment system), convenience (push-button engine start/stop, power folding mirrors, automatic headlights, rain-sensing wipers), and safety (6 airbag, anti-lock brakes, stability control, front and rear sensors with back-up camera) features. And the price isn’t too steep too since all of these features come with a price tag of just P 1,048,000.

Though the nameplate sounds familiar, this isn’t the Vitara of old. After spending almost three decades running around the rugged bush, the all-new 2018 Vitara finally sheds all of that and trades that for civility, comfort, and refinement. It certainly took Suzuki engineers a while to get all of the elements right, but it’s finally all come together now. There are still some areas for improvements for sure, but for the most part, this sub-compact crossover’s bound to be a winner.