Volkswagen is Going Retro with Its First All-Electric Cargo Van 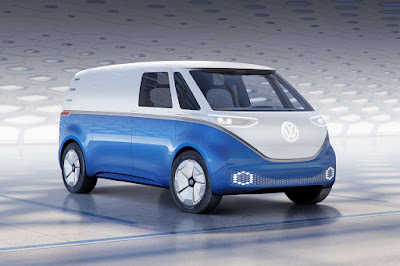 With Volkswagen pledging to move away from the internal combustion engine by 2026, it makes sense for the German automaker to preview some sort of all-new electric commercial vehicle; after all, they sell close to 500,000 of them on an annual basis. Well, leave it to designers to create the I.D. BUZZ CARGO—a retro-futuristic cargo van that’s headed into production by 2022.

It may take design inspiration from the Volkswagen Type 2 (aka Bus aka Bulli aka Hippe-van), but the I.D. BUZZ CARGO is pretty cutting-edge stuff. The first van to be based off Volkswagen’s new modular electric drive matrix (MEB) platform, it’s meant to be speced with different battery sizes in mind, depending on its intended use. According to the carmaker, the driving range is as little as 330 kilometers or as much as 550 kilometers. 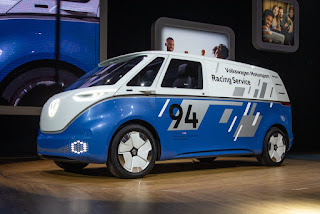 Aside from its all-electric drivetrain, the I.D. BUZZ CARGO also promises an “all-digital cargo hold” which automatically reports its inventory to the warehouse online to initiate re-ordering. It will also have some sort of autonomous driving capabilities. Most important of all, like the original Type 2, it’s also said to provide maximum space utilization.

Volkswagen aims to position the I.D. BUZZ electric van between the Caddy and T-model and thanks to its iconic design, they believe it’ll help them tap into new markets. 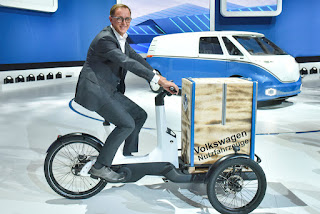 Further diversifying Volkswagen’s commercial vehicle strategy, the carmaker also introduced a new three-wheeled cargo hauler called the CARGO eBIKE. This one is slated to go into production in 2019 serving “last mile” deliveries, especially in tight urban environments.
at 6:30 AM