The 2019 Supra May Be the Last Toyota to Offer a Crisp, Raw Sound 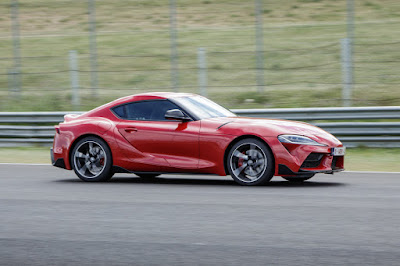 In the world of automobiles, sound has a sprawling lineage. From the revved-up putter of the Ferrari Formula 1 car to the banshee wail of the Lexus LFA, the sound of a car can be as iconic as the chassis or any other component. But it’s more than just aesthetics: Sound matters to the experience of street driving, too.

Not surprisingly, today’s cars sound very different from those of the past. Due to emission regulations and tighter tolerances within the engine, manufacturers have had to adjust their process—and rightly so. What ends up being sacrificed, though, is the purity of sound that captivates the driver. Also reining in the roar of contemporary cars are strict government regulations around noise that have made it nearly impossible to run an exhaust all the way through the back of the car. This is the sort of limitations that Toyota Supra Chief Engineer Tetsuya Tada had to work with.

In developing the Supra’s exhaust note, Tada coaxed and protect the 3.0-liter inline-6’s natural sound rather than force it. That’s why he didn’t set out to create a sound. Instead, he believed that if the initial sound could be unrestricted, the voluptuous “vroom” that typifies the aural racing experience could come out. The result, Tada says is, “a wonderful, piercing sound that just travels forever.”

“When that natural sound reaches the driver, that’s when he can really feel the condition of the car. The driver can react to that, which allows him to drive and control the car better,” Tada continued. “That’s what makes it fun.” In short, it’s fun and classic at the same time.

Sadly, in the whisper-quiet era of hybrid and electrified vehicles, Tada believes this may be the last time he can offer up a car with a crisp, raw sound. It is his gift, of sorts, to the enthusiast and the car community. “Being able to create a car like this, I’m hoping that enthusiasts will be able to enjoy it for the next 20, 30 years moving into the future,” Tada says.