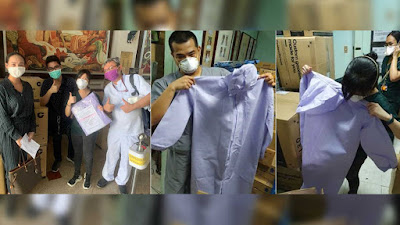 HARI initially delivered 300 of 2,500 PPEs for front liners at the UP-PGH.

The donation was channeled through #HyundaiSAGIP, the flagship disaster relief program of HARI’s corporate social responsibility arm, H.A.R.I. Foundation, Inc. (HFI). Established in 2009 as a quick response to Hyundai car owners whose vehicles were damaged by the Ondoy floods, HyundaiSAGIP has since expanded into a response, recovery, and resilience program.

“We cannot stop at this point. We need to help flatten the curve. Our contribution will most certainly boost the morale of our heroic health workers in our united effort to contain the spread of the disease. As partners in health, HARI and UP-PGH are committed to be in solidarity with every Filipino in these unsettling times,” said HARI and HFI President Maria Fe Perez-Agudo.
at 10:16 AM