Polymetal Gray Arrives for the 2020 Mazda2 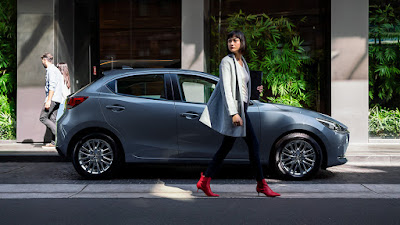 Polymetal Gray Metallic finally comes to the smallest member of the Mazda family, the Mazda2, this April (at least if you live in Japan).

As a quick refresher, Polymetal Gray Metallic is specially designed to maximize Mazda’s new Elevated KODO Design. This new color expresses the “hard feeling of metal” at areas where light strikes and the “unique luster of resin” in areas where it doesn’t. This ever-changing light/shadow expression is what Mazda says gives this shade an entirely different personality compared to previous colors.

Originally developed for the all-new Mazda3, it’s since been made available in a wider variety of models such as the MX-5, and even the CX-5. Now, the Mazda2 gets it as well, but only as part of its new “White Comfort” special edition.

Available in Japan, and solely with the Skyactiv-D 1.5-liter diesel engine, the Mazda2 White Comfort slots below the Mazda2 100th Anniversary Special Edition in terms of hierarchy, and is purely an aesthetics package that’s evocative of the “crisp essence of the northern country.”

Aside from its aforementioned Polymetal Gray Metallic exterior color (it’s available in other colors as well), the Mazda2 White Comfort also gets “Pure White” leather seats combined gray cloth. This same white leather is found on the door panel and knee pads as well. White leather aside, it also introduces Grand Lux—a suede-like material on the dashboard (and door panel) akin to the Mazda6 as well as steel blue accents in place of the brushed aluminum ones.

With Thailand being the source of Mazda2 models in the Philippines, it’ll probably take a while for the new color to arrive locally. That being said, it might be a great idea for Mazda Philippines to introduce Polymetal Gray Metallic as part of its newest “Special Series” that previously included the Kabuki, Midnight, Katana, Midnight, and Java edition. The 2020 Mazda2 was launched for the Philippine market last December.

Email ThisBlogThis!Share to TwitterShare to FacebookShare to Pinterest
Filed Under: Mazda 2, News, Sub-Compact