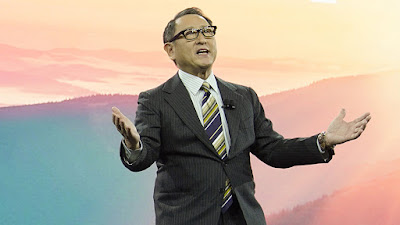 Akio Toyoda, Chairman of the Japan Automobile Manufacturers Association (JAMA) paints a grim picture facing the Japanese automotive industry as the world battles the COVID-19 pandemic, and outlines the commitment of JAMA members to keep that from happening.

In a message outlining JAMA’s response to the pandemic, Toyoda-san is already picturing the Japanese auto industry to be a in tough situation. He said:


“The day will come when humans will conquer the threat of COVID-19. However, if the current situation continues, the economy in Japan may be exhausted. It may not even be possible to find a way to tackle COVID-19 fully before the economy is in ruin.”

Toyoda-san goes further to say that the automotive industry employs around 5.5 million workers in Japan—10 percent of the working population there. With its profound influence, it could cause a ripple effect to other industries to the tune of 2.5 times. In Toyoda-san’s own words:

With that, JAMA and its members will make every effort to stimulate the economy, and more than anything, try to protect employment to help stop the collapse of the Japanese economy.

Toyoda-san looks to the lessons of 2011’s Great East Japan Earthquake where afterward, Toyota was very insistent about retaining domestic production despite criticisms stating that it’s wrong to stay focused on Japan in terms of production.


“After the earthquake and tsunami disaster, I believed that offering only temporary support would not be effective for a ‘true recovery’ of the Tohoku region, so we [Toyota Motor Corporation] built a new automobile body manufacturing company in the area and also a school that teaches monozukuri (making things).

This effort aimed at providing the type of long-term recovery support needed to establish the roots of ‘making cars’ there.

More than anything, new technology and skills are being created in the Tohoku region. These skills will be passed on; the people who learn these skills will teach this to the next person.

And they themselves will create a place where they can work, maintain, and develop themselves. At the time following the disaster, I made a strong commitment to myself that I wanted to establish Japanese monozukuri there, and was very focused on domestic production, and I don’t think this was a mistake.

As an industry, I believe we have the tenacious DNA that will help us to survive, so we should do all we can to survive!”