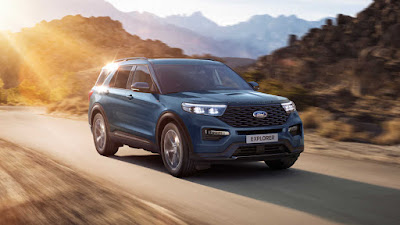 Ford’s made gains when it comes to improving the Explorer’s fuel economy. From ditching the V8 to plopping in a downsized turbo engine, Ford’s 7-seater SUV has been sipping less and less of the unleaded stuff in recent generations. With the 2021 Explorer though, it’s about to make its biggest efficiency gain yet, and that’s thanks to plug-in hybrid technology.

Now, admittedly, “green” isn’t the first thing that comes to mind when you think about America’s best-selling mid-sized SUV. But because Ford’s now selling it to markets that actually care about fuel economy and emissions (yes, that’s you, Europe and China), Blue Oval engineers managed to mate the 3.0-liter EcoBoost V6 engine and 10-speed automatic to an electric motor with a 13.6-kWh lithium-ion battery. The result? 48 kilometers of pure electric driving range (charging takes less than 6 hours from a 220-volt socket), and fuel efficiency reaching 34.48 km/L! Oh, and the 457 horsepower, 825 Nm of torque, and 2.5-ton towing capacities aren’t bad either.

The Explorer Plug-In Hybrid, as it’s officially called, also has “Intelligent All-Wheel Drive.” Using inputs from dozens of sensors (including the ambient air temperature), it can vary power between the front and rear wheels using a new single-speed transfer case with an electro-mechanical clutch.

Like all other members of the 2021 Explorer line, the Explorer Plug-In Hybrid is touted as a “true 7-seater,” with close to 1 meter of headroom for all three rows, and more than 1.5 meters of shoulder and hip room for the first and second rows.

Now, the question is: will Ford Philippines bring in the Explorer Plug-In Hybrid? That’s still a big question mark. For now, Ford is focused on running out the current Explorer, and with that, they’ve been throwing huge discounts (as much as P 300,000 for some variants).

According to Ford Philippines’s managing director, the earliest time our market can expect the all-new Explorer is late 2020 or early 2021. With that, it’s still too early to tell what sort of powertrain we’ll be getting. But here’s hoping they’ll at least consider bringing in the plug-in hybrid variant too.