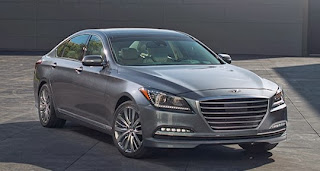 Hyundai’s flagship sedan, the rear-wheel drive Genesis Sedan is getting the full unveil at the North American International Auto Show. Though it’s generally a niche product (here in the Philippines, at least), it showcases the Korean carmaker’s future design direction with Fluidic Sculpture 2.0.

Since its 2009 debut on the Sonata, Fluidic Sculpture has progressively influenced every Hyundai since. The 2015 Genesis Sedan will be the first one to embody Fluidic Sculpture 2.0. This new look is made up of three aspects: fluid aesthetics, the modern Hyundai look, and a premium ambience. Fluidic forms are still present but with a more refined and precise presentation. According to Hyundai, it is adaptable to its entire product range including the all-new Sonata which will debut later on in the year.

Other key design features include the hexagonal grille, a crease accent running along the car’s flanks, and a dynamic rear design conveying kinetic elegance. Even the Genesis Sedan’s proportions, with a long dash-to-axle length, longer wheelbase, and shorter overhangs are part of this new design language.

Going back to the Genesis Sedan, it boasts of a 3.8-liter V6 engine good for 333 horsepower or a 5.0-liter V8 with 429 horsepower. Though rear-wheel drive is standard, the Genesis is available with all-wheel drive.