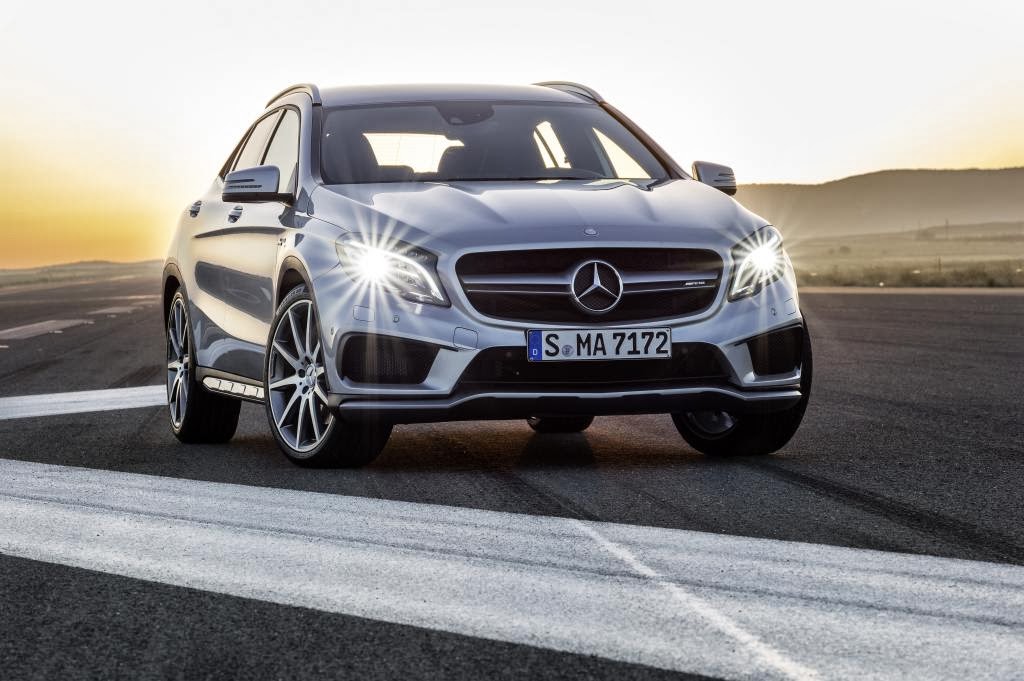 Mercedes-Benz has lifted the veil off its high-performance compact crossover, now christened the GLA 45 AMG, before its official debut at the 2014 North American International Auto Show. Targeted for a younger demographic, the GLA 45 AMG is dubbed as the “all-rounder with driving performance” thanks to its powerful motor and 4MATIC all-wheel drive system.

The GLA 45 AMG is the third AMG model to feature a 4-cylinder turbo engine (the two others are the A 45 AMG and the other, the CLA 45 AMG). Mercedes-Benz says its AMG massaged 2.0-liter turbo is the most powerful series-production 4-cylinder engine in the world with 360 horsepower and 450 Nm of torque. This has been achieved through direct-injection technology and a twin-scroll turbocharger. Despite these monster power figures, the GLA 45 AMG is good to pass Euro 6 emission standards and can still return up to 13.33 km/L thanks to ECO start/stop function. Mated to this engine is the AMG SPEEDSHIFT DCT 7-speed dual clutch transmission with a RACE START function for optimal acceleration. This transmission, also seen in the SLS AMG Coupe, can rocket this all-wheel drive crossover from 0-100 km/h in just 4.8 seconds.

Mercedes-Benz’s trademark 4MATIC all-wheel drive is standard equipment on the GLA 45 AMG. It’s primarily a front-wheel drive vehicle until the system detects possible slippage and then can split the torque 50/50 front-to-rear. In addition, the GLA 45 AMG comes with ESP with Sport and Curve Dynamic Assist (Mercedes-Benz speak for Torque Vectoring Control). The GLA 45 AMG also features a sport-tuned suspension and a high-performance braking system. The standard wheel and tire size is 235/45R19, but it can go up to 235/40R20 as an option.

Outside, the GLA 45 AMG is distinguished with by its unique aerodynamics package, use of carbon fiber accents, and AMG brake calipers. Inside, sport seats are standard and so is the three-spoke sports steering wheel, and carbon fiber trim.

The 2015 Mercedes-Benz GLA 45 AMG will make its debut at the 2014 North American International Auto Show with sales to start by mid-March 2014 in Europe.