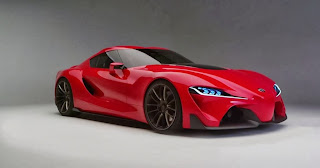 Responding to Akio Toyoda’s call for more design revolution and more heart-pounding design at Toyota, the Japanese carmaker launched the “Future Toyota 1” or FT-1 Concept at the North American International Auto Show (NAIAS). So-called because it’s Toyota’s ultimate expression of what a Toyota coupe should be, it successfully builds up on Toyota’s rich heritage with cars including the Celica, Supra, and the 86.

Designed by Toyota’s Caltry Design Research, the FT-1 uses a new design language for Toyota: “Function-sculpting”. This gives the FT-1 a curved, muscular, and expressive body form that seems to have been shaped by the wind. Inlets, ducting, and vents all reinforce its track-ready nature while a retractable rear wing deploys to create additional downforce. The FT-1 features a cockpit rearward design, a nod to the legendary 2000GT while improving weight distribution.

Inside, the FT-1 has a straight-to-business type cockpit that has the driver in complete control. The A-pillars are set far back to improve visibility. A delta-shaped display zone surrounds and integrates the driver, putting him one with the cockpit.  The steering wheel is clearly inspired by Formula 1.

What about performance? Now, that’s something trickier. Toyota’s calling the FT-1 an “ideally balanced, rear-wheel drive layout” sports coupe. Nonetheless, peering out of the transparent engine over is an “ambiguous engine cover [that] hides a power plant left to the imagination of the onlooker”. Personally, give me a high-revving V8 engine with north of 500 horsepower (preferably shared with the RC F).

But while the FT-1’s real-world performance is best left to your imagination, fans of virtual racing will be glad to know that it’s now available for download in Gran Turismo 6. Caltry has actually collaborated with Polyphony Digital, the makers of the Gran Turismo racing series to bring the FT-1 into the game. There, Toyota President Akio Toyoda himself lapped the FT-1 on a virtual version of the Fuji Speedway faster than his best time in his LFA (in the real world, of course).