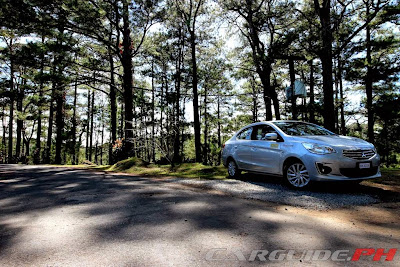 Thirty five liters—it’s not exactly much to go by, especially for a 267-kilometer drive to Baguio. Whether you’re putting pedal to the metal or driving gingerly, you’ll most likely eat through 35 liters on a one-way trip up to the Philippines’s summer capital. This is all well and good if you’re driving a car that has a 45-, 60-, or even 70-liter tank—you have a lot more fuel to play with, a bigger margin for error if you will. But what if you’re tasked to drive a car with a 35-liter tank all the way to Baguio? Forgetting that this is a fuel economy run, the real test for the Mitsubishi Mirage G4 is if it can prove its worth outside the city; if it can reach Baguio with some fuel left in the tank and four passengers who’ll find the journey comfortable and relaxing. Glad to say, the Mitsubishi Mirage G4 passed with flying colors.

Meeting up at DCT Holdings, a Mitsubishi dealership located along EDSA-Balintawak, members who’re participating in this fuel economy run were divided into teams of 3 or 4. As luck would have it, I was teamed up with the Autoindustriya team that consisted of Eric Tipan and two of the “healthiest” motoring media out there: editor-in-chief Vince Pornelos and photographer Jet Rabe. Though Mitsubishi engineered the Mirage G4 to have one of the lightest, if not the lightest, curb weight in its class (ranging from 870-905 kilograms), having a fully-loaded car certainly won’t do wonders for fuel economy. Still, we shrugged off our clear disadvantage and worked out strategy while staying within the spirit of the rules. What rules? Simple: drive within the NLEX, SCTEX, and TPLEX’s recommended speed limit with air conditioning on.

Though Mitsubishi executives didn’t clearly spell out not to do outrageous things like pushing the Mirage G4 through the toll gate or coasting with the engine off, our team felt these were just too dangerous considering we were traveling on public roads in a 10-car convoy. And so, we simply inflated the Bridgestone Ecopia EP150 a few PSI above the recommended tire pressure and set off to the Shell Tabang station for our official fill-up.

With fuel eco run veteran Vince volunteering to drive our humble GLX M/T, he did his best to learn the most economical way to drive the Mirage G4 en route to the Shell station. Vince carefully took note of when the Mirage G4 achieved the highest speed at the lowest engine rpms. Using the on-board trip computer that measures mileage real-time, he concluded that a speed of 70-80 km/h at fifth gear was most economical. As teams took turns filling up and shaking the car (to remove air pockets that built up in the fuel tank), our team lessened as much weight as possible. This even included emptying the washer reservoir. After loading up on Shell Fuel Save unleaded, we flagged off. The fuel economy challenge officially began.

The first dozen kilometers on NLEX was uneventful—our team was happy staying on the right side, letting faster traffic zoom us by. Vince noted that the Bridgestone Ecopia tires has excellent rolling resistance, allowing him to maintain speed without needing to press the accelerator as much. However, as soon as we reached the Candaba Viaduct, our pace turned to a crawl—there were some road works, causing everyone to squeeze into a single lane. Acting as spotters for Vince, we told him when to turn on or turn off the engine (our own version of traffic idle start/stop) saving us some precious liters in the process. As we made our way through the 5-kilometer stretch of traffic, we almost wanted to push the car. But we didn’t give into the temptation and simply stayed inside in the comfort and safety of the Mirage G4.

As soon as we passed the Candaba Viaduct, traffic opened up and we were up to our usual 70-80 km/h pace once more. The rest of the journey was once again uneventful, as the Mirage G4 breezed through SCTEX and the newly opened TPLEX. Aside from Vince consciously driving economically and us looking for potential traffic up ahead, we didn’t do much else. We listened to music in the Mirage G4’s standard iPod-capable sound system and enjoyed the cool breeze of the air conditioning. Reaching Shell Urdaneta, it was the moment of truth. Filling up to the brim (including a couple of strong shakes), our car sipped just 5.23 liters of fuel. That’s good enough for 28.5 km/L—surpassing Mitsubishi’s internal figure of 21 km/L, a remarkable feat for any car, let alone for one that’s designed to run in the city.

After a hearty lunch, everyone made their way to the Baguio Country Club, the final destination of this road trip, in double time. With the fuel economy challenge now over, everyone pushed the Mirage G4’s 1.2-liter 3-cylinder MIVEC engine. Already proving its worth at the Mirage Gymkhana Challenge last year, the 78 PS, 100 Nm engine successfully carried everyone via Marcos Highway. Though the suspension is largely tuned for comfort, some teams actually had a bit more fun, doing spontaneous Tōge Battles (Japanese mountain pass racing). Staying in the back seat for the entire duration of the five-hour trip, the Mirage G4 proved to be very comfortable and spacious. Taking in the chilly weather, it was time for dinner and the moment of truth: awarding for this fuel economy run.

We were convinced that our 28.5 km/L reading was enough for the win. In reality, it was only good for first runner-up. Another set of fuel economy veterans, Team Auto Review, composed of Ron delos Reyes, his son, Ronald delos Reyes, and cameraman Dave Madrid bested us with a figure north of 33.6 km/L (they sipped just 4.52 liters)! Still, we were pretty happy given we emulated real-world driving and didn’t resort to outrageous and unsafe fuel eco run tricks. What’s even more surprising is that the remaining 8 teams all managed to average 18.9 km/L for the CVT and 22.2 km/L for the manual, consistent with Mitsubishi’s own 21 km/L, figures achieved in test conditions. It certainly proves that the Mirage G4 isn’t just a commendable car for city driving, but an equally capable, comfortable, and fuel-efficient car for the occasional out-of-town trip, whoever might be behind the wheel.