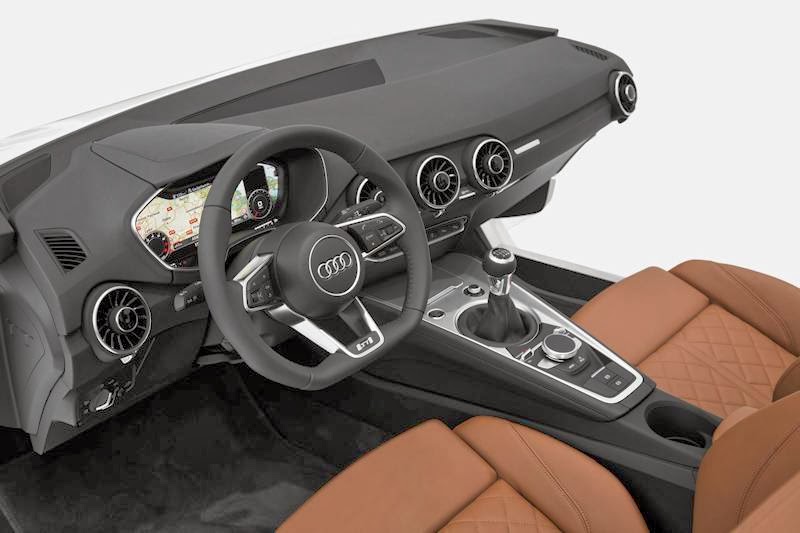 In a very unique move, Audi first showed off the interior of its next-generation TT Coupe at the 2014 Consumer Electronics Show (CES) even before the rest of the car. However, it seems fitting given Audi wants to tout several new technologies.

Being a driver-focused car, the all-new TT’s cockpit features a very unique instrument cluster which is fully-digital. Made with a 12.3-inch LCD screen, Audi dubs it as a “virtual cockpit”. It makes do without the usual center console infotainment screen and instead relies on the virtual cockpit to display both driver-centric and infotainment display in two modes. Besides the new instrument cluster design, the Audi TT’s climate control has migrated from the usual location to the air vents themselves. Thanks to these changes, the TT’s center console has been made simpler and more streamlined.

The next-generation TT will be shown in due course through the year.

Press Release: Purity, sporty, and clean – Audi to present its new interior at the CES

Puristic, sporty and fully focused on the driver – for the new TT, Audi is significantly advancing its interior design. At the Consumer Electronics Show (CES) in Las Vegas held from January 6 through 10, 2014 the brand with the four rings will, for the first time, be presenting the compact sports car's new interior, which will be launched on the market in the course of the year.

As Prof. Dr. Ulrich Hackenberg, Member of the Board of Management of AUDI AG for Technical Development says, "The first Audi TT was the design icon per se, the second generation was even sportier, right through to the TT RS plus with its five-cylinder TFSI and 360 hp. And with the new Audi TT, the driver will be able to experience the technology to an even greater extent – just as would be expected from a genuine sports car. And it comes with a new generation of electronics and connectivity features."

For this reason, the Audi virtual cockpit is the focus of attention for the first time in one of the brand's production models. The fully digital instrument cluster displays all the information directly in front of the driver, meaning that there is no need for a central MMI monitor. This solution gave the designers the freedom to slim down the instrument panel architecture such that it visually conveys the Audi lightweight construction principle.

With its clear lines and innovative operation, the interior of the next TT generation has been redesigned from the ground up. From above, the instrument panel resembles an airplane wing; set low and with a turbine look about them, the round air nozzles, a classic TT feature, are reminiscent of jet engines. The controls for the air conditioning are also housed in the vents – the adjustment functions for seat heating, and for the temperature, direction and strength of the flow of air are located in their axes, with small displays indicating the chosen setting. Located beneath the central air nozzles, the switches for the hazard warning light and the secondary functions are centrally positioned and easily accessible.

With its brilliant graphics with a 3D impression and highly-detailed effects, the Audi virtual cockpit with its 12.3-inch TFT monitor sets new standards. Drivers can switch between two display modes. In the classic view, the speedometer and rev counter are in the foreground, while in "infotainment" mode, the virtual instruments are smaller. The space that is then created offers ample display space for functions such as the navigation map.

All elements of the new Audi TT operating concept are focused on the driver. The compact sports car's new multifunction steering wheel features a flat-bottomed rim, with aluminum-look clips framing its spokes. The buttons and controls on the spokes allow you to control almost all functions, including the ultra-modern infotainment system. The menu is structured to reflect that of a smartphone and includes a full-text search function (MMI search). All the main functions are just a few clicks away – the entire operation superbly conveys a new kind of "joy of use". The MMI terminal on the center tunnel console, the second control unit alongside the steering wheel, has also been exhaustively redeveloped. Thanks to the MMI touch, the driver can scroll and zoom in lists and on maps. And accessing other options has been simplified; in future this will be possible using just two rather than four buttons in the area surrounding the rotary pushbutton.

The innovations in the Audi TT interior include the S sport seats with their significantly curved side bolsters, the integrated headrests and the low seating position typical of a sports car. The slender character of the seats is emphasized by bezels on the flanks of the backrest and a cover on the back; the backrest is adjusted using a loop. The side bolsters of the S sport seats can be adjusted pneumatically.

With its clear, sharp lines, the interior as a whole perfectly expresses the new Audi TT's sporty nature. The center tunnel console, that supports the lower leg when driving fast through a bend, and the door panels boast flowing mutually-reinforcing contours. All the details highlight Audi's attention to quality – from the design of the gear knob and the precise functioning of the rotary pushbutton to the Audi virtual cockpit.
at 7:00 AM