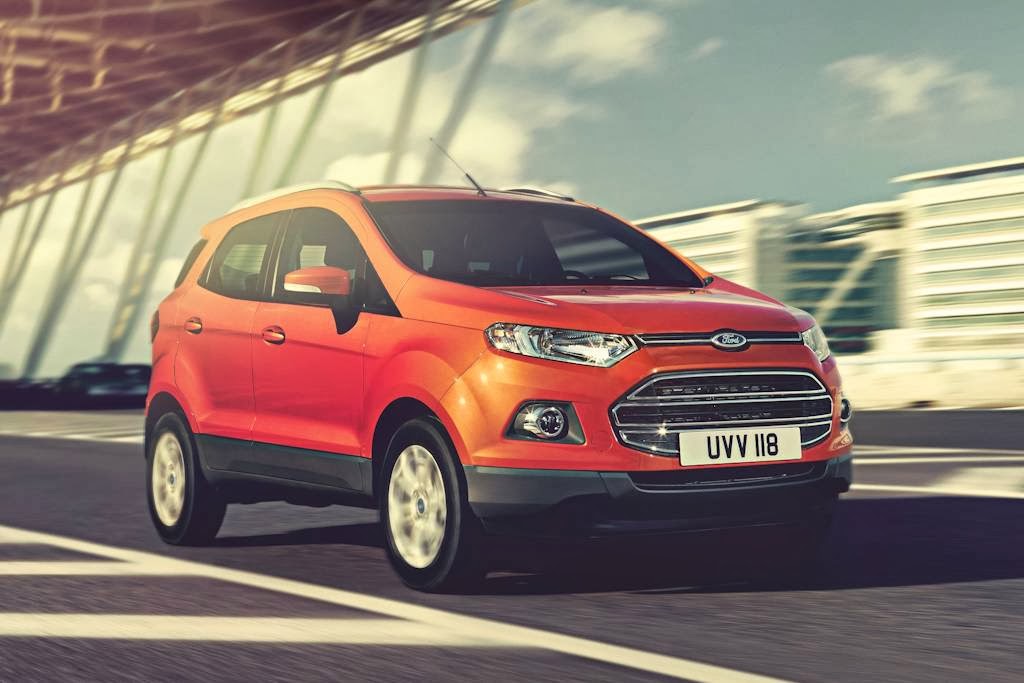 Ford is set to obliterate the competition with a new segment-busting vehicle that’s designed and built to marry the agility, affordability, and fuel efficiency of a compact car with the flexibility and spaciousness of a sport utility vehicle: the Ford EcoSport.

The Philippines’s first B-segment SUV, the EcoSport is an aspirational alternative to a typical B- (subcompact) or C-segment (compact) sedan. Though it rides on top of Ford’s B-segment platform (which also happens to underpin the award-winning Fiesta), the EcoSport certainly looks the part: it’s rugged and muscular while remaining dynamic and young at the same time. Upfront, it conveys an energetic look with its slim headlamps framing a high-mounted trapezoidal grille. At the side, the raised belt line and hard character crease lend a macho look; while at the back, the wrap-around rear window and oblique tail lamps lend a sleek profile. The spare tire was intentionally mounted at the back as a classic SUV design cue while giving a larger, more usable cargo space with a lower loading height.

Inside, the EcoSport borrows heavily from the Fiesta’s cabin, which is great thing. It features a highly ergonomic cockpit layout with large controls and knobs. This is then complimented by a top-notch fit and finish with soft-touch fabrics, tight panel gaps, and Ford’s Ice Blue dashboard illumination. The EcoSport fits 5 comfortably with the larger than expected interior space and can carry up to 705 liters of cargo with the 60/40 rear seats folded (enough for a washing machine). The driver gets the added bonus of an adjustable lumbar support and front arm rest while a high seating position offers a commanding view around the EcoSport making it highly maneuverable in the city.

Sharing roughly 30 percent of its components with the Fiesta, the greatest engineering challenge of the EcoSport is how it can successfully combine the attributes of a compact car with that of an SUV. First, the EcoSport uses an advanced 1.5-liter gasoline engine with Ti-VCT or Twin Independent Variable Camshaft Timing technology. The EcoSport’s engine produces a commendable 110 horsepower at 6,300 rpm and 142 Nm of torque at 4,500 rpm. Making sure that power is efficiently transferred onto the road, the EcoSport comes with either a 5-speed manual or the trademark 6-speed PowerShift dual clutch automatic transmission. Second, the EcoSport features an aerodynamically honed body and electric power assist steering (EPAS) for better real world fuel efficiency. A new Pull-Drift Compensation safety feature negates the effects of highway crosswinds making the EcoSport a stable vehicle even at high speeds. Third, the EcoSport features a rear Torsion Beam Axle with thick sway bars and 16-inch alloy wheels fitted with 205/60R16 tires for agile and capable handling. And lastly, Ford raised the EcoSport’s ground clearance to 200 millimeters, resulting in a water wading depth of 550 millimeters—higher than some “hardcore” SUVs.

As sophisticated as the EcoSport is underneath, it’s even more surprising with its level of creature comfort features. First, with Ford Power Start, drivers no longer need their keys to either unlock the SUV or start its engine. All it takes is the push of a button. Second, the EcoSport comes with Ford SYNC, an unparalleled in-car connectivity system that combines hands-free phone calling and music selection through intuitive menus or voice commands. Third, the EcoSport features 20 storage bins including a chilled glove box that can keep a six pack cool. And in the highest Titanium trim, the EcoSport actually has automatic climate control, leather seating, and even a sunroof as standard equipment.

Since “safety” is one of Ford’s brand pillars, the EcoSport comes standard across the range with Dual SRS airbags and anti-lock brakes with electronic brakeforce distribution. Higher models such as the Titanium and Trend also receive Electronic Stability Control with a hill launch assist. The Titanium is the sole model to receive rear back-up sensors.

“The all-new Ford EcoSport was designed to break though the boundaries of today’s compact car and SUV segment. With a combination of quality design, an array of smart technologies, and great value for money, it sets a completely new standard in the market,” said Kay Hart, Managing Director of Ford Philippines.

Note: the specs are in high-resolution JPEGs. Just click on the image and view in a separate tab or click 'Save As' to see a clearer version. 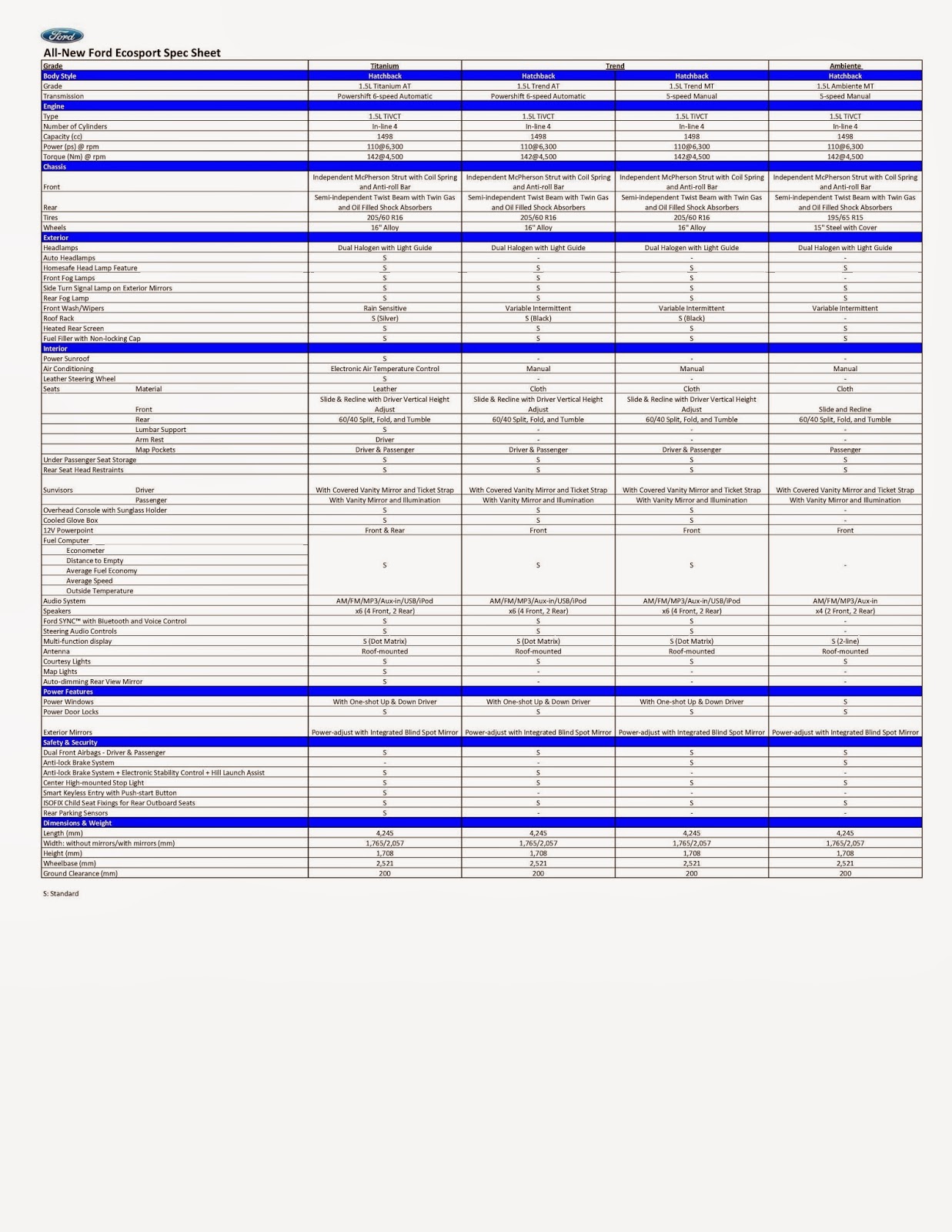 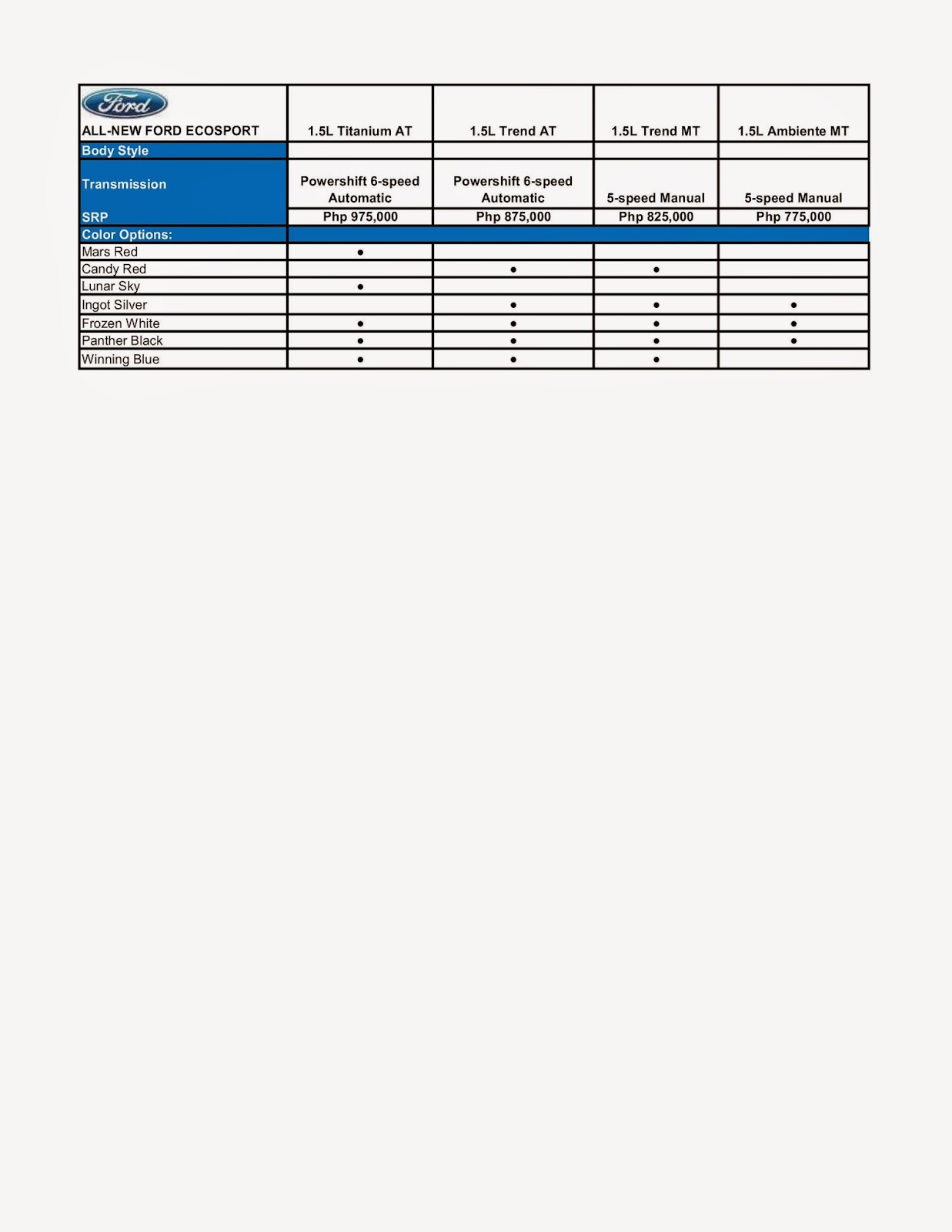