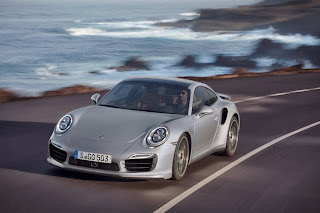 In introducing the new generation 911 Turbo S, Porsche is presenting the top cars of the 911 model series in terms of technology and dynamic performance. More than 40 years after the world premiere of the first Turbo prototype, the Porsche 911 Turbo S is redefining the limits of what is feasible in a sports car for everyday use.

For decades, the unique selling point of the 911 Turbo models has been the extreme spread of its capabilities that range between dynamic performance and efficiency, be-tween exclusivity and everyday practicality, between tradition and innovation. Advanced development of existing systems and the introduction of new active systems are ex-tending this range in such a way that the 911 Turbo models have now cranked their top values up a notch in all individual disciplines.

In fact, the lap time of the new 911 Turbo S at the North Loop of the Nürburgring was reduced to well under 7:30 minutes – naturally with standard production tires. This advances it into realms of dynamic performance that were previously only attainable by uncompromisingly designed super sports cars.

More than ever, this new top model also makes a clear visual statement about its performance. The characteristic widely flared rear fenders of the new 911 Turbo S are 28 mm wider than those of the 911 Carrera 4 models – a nearly level surface of more than a hand width extends out from the C-pillar to the outer edge of the car.

The new 911 Turbo S is now available in the Philippines.