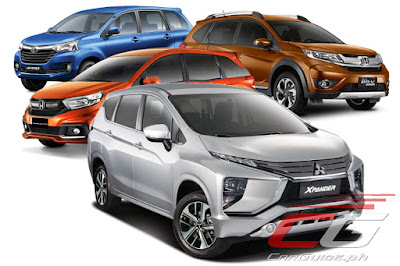 Mitsubishi Motor Philippines Corporation (MMPC) has just released their much-awaited Xpander MPV. Dubbed as the next-generation MPV, the Xpander combines the best attributes of a compact MPV with the design cues of a compact SUV.

Though you can try out the all-new Xpander for yourself at MMPC’s Xpander Xpo and you can also read our in-depth coverage of its launch (including its full brochure), naturally we just had to pit it against some of its potential rivals. Here, we compare the Xpander versus the Honda Mobilio and BR-V as well as the Toyota Avanza. We discounted the Suzuki Ertiga because it’s powered by a smaller displacement engine. We can certainly do another comparison in the future, but for now, it’s just the 1.5-liter MPV/SUVs.

You can check the full table below (it’s high-res, so you can right-click and Save As) , but here are some interesting takeaways:

The Mitsubishi Xpander is class-leading in terms of size. It’s slightly longer, wider, and taller than the next biggest choice, the Honda BR-V. It also trounces everyone else in terms of wheelbase and ground clearance.

In terms of curb weight, it’s certainly on the portlier side with the lightest Xpander tipping the scales already at 1,220 kilograms. And that could potentially dampen its on-road performance given its 1.5-liter MIVEC-equipped 4-cylinder engine touts run-of-the-mill figures. It does match the Avanza for having the biggest fuel tank in its class, but it’ll likely need it to eek out the extra range given it uses a 5-speed manual or 4-speed automatic.

The suspension set-up is the same for all these choices (Independent MacPherson Struts upfront and rear Torsion Beam Axle), however, the Xpander does benefit from high-performance shock absorber valves which are derived, supposedly, from the Lancer Evolution X. Whether that will give spirited handling is best left for another story, it does have a tight turning circle of 5.2 meters (the BR-V is unwieldly at 5.6 meters).

Feature-wise, the Xpander is well-equipped for the price. While it’s not the cheapest in this price range, it’s certainly not the most expense either. And yet, it’s fitted with comfort-oriented features such as a tilt/telescopic steering column (class-exclusive). It’s also the most generous in terms of infotainment system and speaker count (it’s got 6).

When MMPC said they’ll shake up the small MPV market with the Xpander, they’ve clearly delivered on this front. All it takes now is a proper drive to find out how well it performs.