Which is Cheaper to Own: Nissan Patrol Royale or Toyota Land Cruiser Premium? 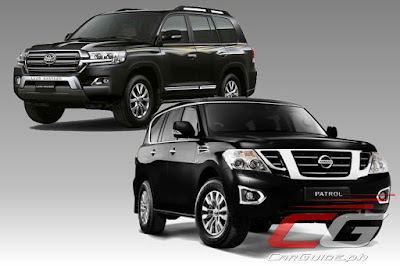 The Nissan Mobility Tour is all about giving the chance to would-be buyers to experience first-hand what Nissan Intelligent Mobility (NIM) is all about. Through a series of obstacles, features such as Around View Monitor and Intelligent 4x4 are put to the test.

Often overlooked though is that through these series of events, Nissan also wants to educate Filipino car buyers on the advantages of owning one of their vehicles. And so, we decide to put their math to the test and see if owning a Nissan is indeed a value-for-money aspect. For this particular example, we’ve decided to go straight into the deep end and pit the Nissan Patrol Royale versus the Toyota Land Cruiser LC200 Premium. 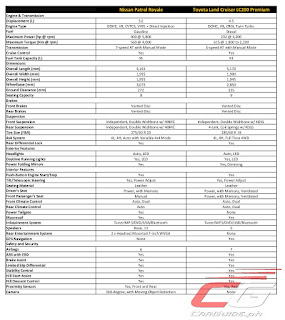 Spec-to-spec, not much separates these two politicians’ choice. On one hand, the Land Cruiser has the upper hand in terms of torque (a tree-pulling 615 Nm) while the Patrol Royale easily has 40 percent more horsepower (400). Both of these “katas ng pork barrel” also offer standard seating for 8, above 90 liters of fuel tank capacity, and vented disc brakes on all four corners—in case protesters decide to jump in front of your speeding convoy.

Dimensionally though, the Patrol Royale does have the advantage in packaging. It’s slightly shorter, but wider and taller than the Land Cruiser. It also has a bigger wheelbase and higher ground clearance (272 mm versus 225 mm) making peons look even smaller from the window.

Getting into the mechanicals, both the Nissan and Toyota offer hydraulically adjustable stabilizers (Nissan calls it Hydraulic Body Motion Control while Toyota calls it Kinetic Dynamic Suspension System), although the Patrol Royale does have the advantage of having independent suspension all-around to the Land Cruiser’s rear 4-link with coil springs.

Nissan’s advantage also extends to the creature comfort features. With the exception of ventilated power adjustable front seats and an additional rear aircon zone, it has the advantage over the Toyota from the generous infotainment system with 13-speaker Bose sound system to even front and rear proximity sensors with a 360-degree camera (the Land Cruiser, shockingly, has no camera whatsoever).

Now, here’s the most surprising part: despite the increased thirst of its 5.6-liter V8 engine gasoline engine, the Patrol Royale actually ends up with a lower ownership cost up to 100,000 kilometers. 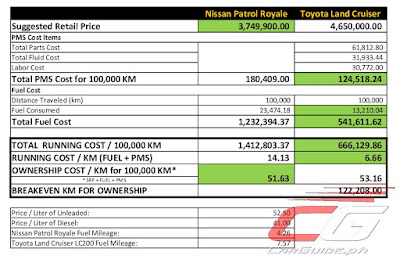 So where does the Patrol Royale gain ground? Simple: lower purchase price. Thanks to the effects of TRAIN, the Patrol Royale has a close to P 1 million (P 900,100) price advantage over the Land Cruiser, and this goes a long way in helping the Nissan recoup its more expensive fuel and servicing cost. In fact, over a period of 100,000 kilometers, it’s ownership cost per kilometer is P 51.63 compared to Toyota’s P 53.16.

Find out more about Nissan’s aftersales program at the final leg of the Nissan Mobility Tour. It’s happening on March 23-25, 2018 at SM City Davao.
at 8:00 AM