Hyundai Philippines Sales Slow Due to Effects of TRAIN

Hyundai Asia Resources, Inc. (HARI), the official distributor of Hyundai vehicles in the Philippines, has registered 2,649 unit sales for the month of February 2018. This leaves the total 2018 year-to-date Hyundai unit sales at 5,552, or a modest 1.5 percent increase compared to the 5,470 units sold during the same period of 2017.

The Passenger Car (PC) segment maintains its position as the main volume driver of sales by accounting to almost three-fourths of the total units sold, or 4,002 units year-to-date. The well-known Accent accounted for 2,363 units during this period. However, it was the Eon and Elantra that played as the main growth driver for this segment with a year-to-date growth of 1.8 percent and 88 percent respectively.

Although the Light Commercial Vehicles (LCV) segment recorded only one fourth of the brand’s total sales, the segment was at the spotlight with all its models registering positive growth. This was led by the beloved Grand Starex whose January to February unit sales growth rose by 32.6 percent, or 512 units in 2018 compared to the 386 units sold in 2017. This pushed the segment’s year-to-date sales to 1,550 units, a 18.1 percent growth from last year’s 1,313. 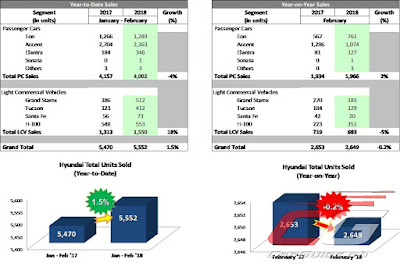