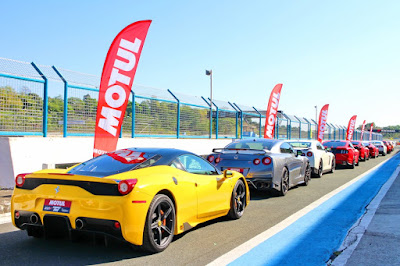 An estimated 80 supercars and more than 110 tuned cars took to the track to celebrate the first Motul 300V Super Fast Track Day.

Held at the Clark International Speedway, the event promoted a safe environment to push both man and machine to their limits. It also let users and patrons test the real performance and engine protection qualities of Motul fully-synthetic engine oil and lubricants.

“This trackday is an offshoot of the Mile Run event we did 6 years ago at the Subic International Airport,” explains Carlos Gono of AutoPlus, the country’s exclusive distributor of Motul products. “Motul patrons wanted an event like this so we organized it along with the help of JP Tuason and Edward dela Rosa of FlatOut Racing.”

The Clark Speedway bristled with machines built for speed from exotic cars including a Lamborghini Huracan Super Trofeo to a bevy of Porsches, Nissan GT-Rs, and event supporters Lotus Cars and Subaru.

In the Philippines, Motul is exclusively distributed by AutoPlus Sportzentrium located at 233 EDSA, Mandaluyong City.
at 1:11 PM