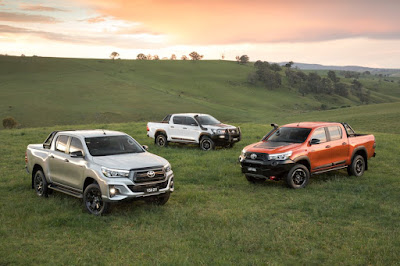 One of the world’s toughest and most reliable partner, the Toyota Hilux is celebrating its 50th anniversary this year. Despite having a name that combines “High” and “Luxury”, it was born to be tough.

Debuting in 1968 as a new “bonnet-type” truck that combined the Briska and Light Stout (yes, those are vehicle model names), the first-generation Hilux was conceived by Toyota and was developed and engineered by Hino Motors. Thus, it can be said that the Hilux always had its roots in the truck format and has always put toughness at the core of its design.

Currently in its eight-generation, the Hilux is the result of direct customer feedback. Toyota actually sent development teams around the world to study how they use their Hilux on a day-to-day basis. With a philosophy that centered around “redefining toughness”, the Hilux goes above and beyond the conventional ideas of toughness.

This led the development team to conclude that the new Hilux should not only be tougher but should also reduce stress as much as possible. Above and beyond conventional ideas of toughness, Hilux boasts ride comfort that makes long, tough drives less grueling, a quiet cabin that allows communication in any conditions, and enhanced cruising range thanks to improved fuel efficiency.

As explained by Hiroki Nakajima, the executive chief engineer behind the Hilux (and also a managing officer of Toyota Motor Corporation): “Our entire development concept was centered on ‘redefining toughness’. We aimed to make the new Hilux ‘tougher’ based on a much broader interpretation of that word. The message we want to deliver to our customers is embodied in our slogan for the vehicle: ‘A New Era for Pickup. Every Inch a Hilux.’”

Find out more about the Toyota Hilux’s 50th anniversary at this special website.
at 2:19 PM

Email ThisBlogThis!Share to TwitterShare to FacebookShare to Pinterest
Filed Under: News, Toyota Hilux