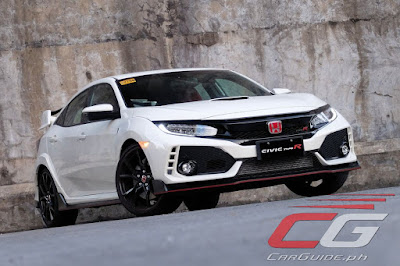 This isn’t the most powerful car I’ve ever driven and it’s not the most expensive either. Yet, when I received word that the Honda Civic Type R would be available for a five-day test drive, it came with a set of instructions as detailed and as specific as a dad sending off her daughter to the prom. But like any juvenile-minded motoring hack, I didn’t pay attention. All I remember was staring at this hot, sought-after girl in a Championship White dress at my doorstep. What did I do? Ride her all night long.

Okay, I promise to end the sexual innuendos there. Moving on, since a lot of things have been said about how the Civic Type R drove magically on the race track, this review’s going to have none of that. What I’m more concerned about is: how does it feel to live with the first Honda locally to wear a red badge?

Perfectly fine, to be honest.

See, the first impression anyone would have, including myself, is how the Civic Type R would probably fly given all those wings, protrusions, and what not. Even if I didn’t find myself starting at the huge rear wing, my eyes couldn’t avoid looking at the vortex generators (those 6 stegosaurus-like roof fins), or the extended fenders, or the protruding carbon fiber aero kit. However, it takes just a few meters to realize that it drives like a Civic, like a regular motherf*cking Civic. Sure, it’s a bit stiffer but given this thing is riding on 30-series, 20-inch tires? Man, this Honda voodoo magic suspension is something else; even my SUV rides like a popsicle in comparison.

In its default “Sport” mode, there’s already a generous amount of suspension travel (for a hot hatch) that it manages to calm even the worst of EDSA’s tantrums. Of course, because of the ultra-low-profile tires, sharper ruts do make their presence felt (and honestly, I did have to literally crawl through some out of fear of damaging the wheels or tires), but it’s quelled even before it reaches the driver’s seat. Oh, and if the girlfriend, wife, or mother-in-law throws a bigger tantrum because of the ride, there’s even a “Comfort” mode that makes things even more pliant. How pliant? Think Civic RS. I kid you not.

While the ride comfort is surprisingly good, there’s one caveat about driving the Civic Type R on regular roads: the ground clearance. Driving Serial No. 00000, this particular unit cannot be sold and is destined to be kept by Honda Cars Philippines as a display piece for their motor show or probably museum. This is where their exacting care instructions come in. A day before being handed over the keys, the car’s handler, Honda’s company driver, aptly named Mr. Bato, had to make sure that this car won’t encounter any sharply-angled parking ramps. He had to enforce the full letter of the test drive agreement and I signed off that any damage to the carbon fiber aero kit will be met with EJK (Nagasgas ang Type R, wag tularan). What’s the ground clearance you ask? Actually, it’s at a respectable 120 millimeters (almost the same as the Subaru WRX STI), but since Honda measures this as the lowest point of any METAL part, this doesn’t include the protruding body kit. Putting a tape measure against the front chin reveals the unmistakable truth: 113 millimeters. In short, take caution when encountering ramps or BGC’s notorious speed bumps.

The cabin is yet another surprisingly livable aspect of the Civic Type R. It’s equal dose of racing car and practical hatchback. The racing part is supplied by those bloody magnificent bolsters with cushion bolsters so thick they can double as armrests (they can also give you a wedgy if you don’t get in the right way too). The rounded alloy gear knob is also a great touch as is the smaller diameter, three-spoke steering wheel. Strip the Type R badges away and what you end up is the same basic Civic dashboard. And with that, it gets top marks on ergonomics and usability. The gauges, switches, stalks—they all look nice and operate even nicer. Space is good in all fronts, though it must be said that the front buckets don’t do favors to the rear legroom—they’re habitable but definitely smaller than the regular Civic’s. The interior is also more or less solidly put together too, with just minor rattles that come out on heavier bumps. If I were to nitpick, I’d say the touchscreen infotainment system desperately needs an upgrade (no physical controls and its laggy) and visibility is a mixed bag: it’s all good at the front, but it could be better towards the back (thankfully, a back-up camera is there for tackling tight parking maneuvers).

Despite its Taylor Swift man-eater reputation, this car is no harder to live with than say, the girl next door, maybe like Emma Watson. She’s the strong and independent type, but man, she can weave magic faster than you can say “Expecto Patronum.” Like how this spell protects against Dementors by summoning happy memories, I couldn’t help but weep for joy at just how good this car is. Show it a great piece of road and it transforms from a great everyday hot hatch into a full-fledged hardcore track star.

Despite looking every bit as the next Fast and the Furious car, throw any of that roleplay into the trash: you don’t have to shift gears every second. The generous torque of the turbocharged 2.0-liter engine means less shifting and less revving. Even on Baguio’s twisty Kennon Road, I didn’t find the need to row through the gearbox as much. Just floor the accelerator and it’s enough to rocket the car past slower traffic. Rev matching also comes in to make you feel like a character from Initial D with a turbo whoosh at every downshift serving as your soundtrack. Okay, it’s not actually perfect. The gearbox action, I find, is short, but for some reason, sixth gear is hard to nail right.

In mountain roads such as these, the Civic Type R produces tremendous amounts of grip. Point the steering wheel and the entire car obeys without any drama. For sure, there’s all sorts of computer trickery at work to keep me pointed in the right direction, but I’ve always felt like being the one in control, and that’s the way it should be for a driver’s car. Through bumpy surfaces and changing road cambers, it feels planted and solid with no unwanted bounce. Torque steer is almost eliminated, but yes, it can still be provoked if you try hard enough. And because I’m reminded of how low the ground clearance is (I don’t want to be an EJK victim), I had to rely on the massive Brembo brakes to scrub speed before hitting anything that remotely resembles a bump.

When not being driven like a maniac, the VTEC Turbo produces great pulling power. There’s no perceptible lag, but because 100 km/h is achieved at 2,300 rpm on sixth gear, the droning exhaust note gets tiring after 3 hours on the speed-limited expressways. Still, it’s remarkably quiet except for the roar from the tires. It cannot go to Baguio and back in a single tank of gas, but it’s still pretty good at conserving fuel: achieving a high of 15.2 km/L at an average speed of 78 km/h to a low of 6.7 km/L at 15 km/h.

Having to return the keys back to Mr. Bato is probably one of the hardest things I had to do in my life. The five days and more than 600 kilometers with her was just so much fun, so exhilarating that it’s like a drug on four wheels. Who cares if it costs close to three million pesos. Who cares if it’s “wrong wheel drive.” Who cares if it’s for f*ccbois. In the end, the Honda Civic Type R earns my respect as the car to beat when you need a 50/50 road and track car. I’ve been bitten by the Type R spell and quite frankly, I like it.