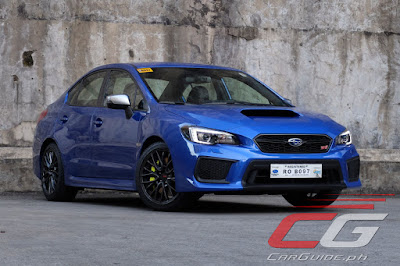 Subaru Tecnica International or STI turns thirty this year, and while they’ve been responsible for Subaru’s motorsports activities, they’ve also become synonymous with go-faster Subarus. A great example is the WRX STI. The latest model, codenamed “VA”, manages to find itself embroiled in a turf war, not against its perennial rival, the Mitsubishi Evolution (rest its soul), but the Honda Civic Type R, Ford Mustang EcoBoost, and Volkswagen Golf R. Can the veteran still muster enough muscle to take on the youngsters?

If it’s all about driving excitement, then it definitely can. When pushed, the WRX STI obliges with its strong power, copious amounts of grip, and the unmatched rumble of its Boxer engine. At the knife’s edge, this Subaru becomes the ultimate racing machine, lighting up its tires and the driver’s face in equal measure. That said, because of its unique four doors with a trunk packaging, there are broader expectations of what it can do. But more on that later.

It’s worth noting that the WRX STI features enhancements that add some aggressive to its overall design while peppering it with luxury and convenience features unheard of before in Subaru’s rally-bred war machine. Outside, it gets an angrier face, steering responsive LED headlights, and massive Brembo brakes finished in neon yellow. The absence of the high-rise rear wing means that this is the Premium model and for that, it gets a powered driver’s seat, leather and Alcantara upholstery, and blind spot indicators with cross-traffic alert along with better looking gauges, red seatbelts, one-touch up/down on all windows, and a folding rear center armrest with cupholders. Honestly, the only thing missing would be the yummy 19-inch rims, although one could imagine what that’ll do to the ride.

As it is, the WRX STI has a very stiff ride. It’s so frigid that it’s impossible not to have passengers constantly complain about how their heads bob up and down at every road rut or how they always feel like they’re about to lose their lunch when traveling at modest speed on EDSA. For all of the suspension’s stiffness though, the body structure itself doesn’t feel as rigid and for that, interior rattles and shimmies are a constant reminder that this is a Subaru of old. Things are particularly bad around the steering wheel area where the rack shakes whenever the car goes over bumps with a slight angle dialed in.

It most definitely fails as an everyday commuter car, but at the sight of open roads and an open throttle, the adjectives associated with the WRX STI change. From stiff and unforgiving, it becomes effortless and fast. Brutal and unforgiving as it is, hard driving is what the WRX STI is built for.

Bringing the WRX STI to the modern age, Subaru has finally updated the all-wheel drive system. Whereas the center differential was controlled by mechanical and electronic means before, this one has gone full digital. Because of this, its on-road responses are quicker and much more fluid than before. Normally, hard launches would result in a slight slippage of the wheels before the car regains composure. Not anymore. Bury the throttle, let go of the clutch, and it rockets hard effortlessly with no nervous ticks. The steering still feels a bit twitchy off-center, but the ancient hydraulic steering manages to be quick, weighty, and communicative. The chassis itself is finely balanced too with zero percent lean and one hundred percent body control. Undoubtedly though, the best bits have to be the brakes. 6-pot front, 2-pot rear Brembo brakes need some prodding to get them to bite, but when they do, they bite really, really hard.

In terms of engine, the WRX STI continues with its aging turbocharged 2.5-liter 4-cylinder engine. The cabin-permeating boxer rumble remains one of its charms, but otherwise, it’s starting to feel long in the tooth. Its power delivery is largely like a light switch: on and off. At lower revs, there’s almost nothing going on. But at the moment the turbo spools up, all 305 horses come rushing in and along with the shove, they become hellbent on trying to snap the driver’s neck or rearrange the passengers’ innards. The Subaru Intelligent Drive (SI-Drive), a driving-mode selector, mitigates some of this weakness but it must be noted that the engine feels choked when left at Intelligent and too brutal at Sport Sharp. It feels most relaxed when left at Sport mode. Fuel economy remains a respectable 6.17 km/L at 15 km/h.

Putting the EJ25 engine to work requires an active right arm and accepting that every day is leg day in the WRX STI. Though the engagement is precise, at times, the clutch pedal effort feels like resistance-band training. The clutch’s engagement point is a bit high in the pedal travel too, making it tough to engage without lurching. The shifter itself is precise, but stiff. It actually requires a bit of an effort as not to upset the passengers, though it must be said that everything works well at speed.

And there’s the rub. The WRX STI works perfectly when it’s driven hard, but not so much at any other time. Gone are the days of proving which turbocharged sedan or hatchback is more hardcore since they’re all equally capable as the last. Today, the battle rests on which one proves to be more flexible, more balanced, more refined, and simply, more livable on a daily basis. Subaru may have added more luxury and convenience features this time around, but underneath the slick new suit, it’s raw and somewhat juvenile. Thirty years on, STI continues on making fiery, driver-oriented performance sedans and this latest one’s no different. Awe-inspiring as it is, this one-trick attitude cannot be relied on forever. The latest WRX STI may still stir up a driver’s soul and imagination, but its rivals also serve as a reminder that Subaru better come up with an updated model real soon.