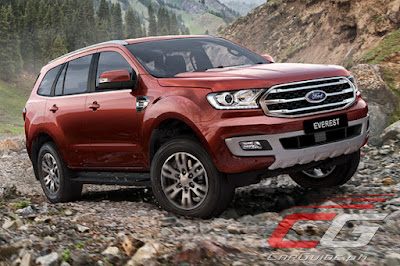 Ford is sprinkling some of that Ranger Raptor magic on the Ranger pick-up truck and Everest SUV by giving them the same 2.0-liter twin-turbo EcoBlue diesel engine and 10-speed automatic. The news was broken by Ford Australia which expects an on-sale date by the fourth quarter of this year (expect ours to arrive at around the same time).

First up, the 2019 Ranger gets a slight massage to its looks gaining some of the Everest’s good looks in the process. It gets the fancier-looking headlights that’s also fitted with LED daytime running lights and HID headlights. It also gets a new grille and a wider air intake on the lower bumper. There’s still an abundance of chrome on the XLT models which turns into dark gray details on the Wildtrak model. Inside, it boasts of more soft-touch materials inside and not much else. Good news is that SYNC 3 will be made available on most variants.

The Ranger’s chassis gets some tweaks including a revised suspension geometry for less body roll and sharper steering. It won’t affect the overall load-carrying or towing capacity though. At the same time, an impressive Tech Package means select Ranger models will have Adaptive Cruise Control along with Active Park Assist—the first pick-up truck to boast of that feature. It also will have automatic emergency braking.

Now to the juicy bits. The 2019 Ranger gets the Ranger Raptor’s 2.0-liter twin turbo EcoBlue engine putting out 210 horsepower and 500 Nm of torque. The latter figure is made from as low as 1,750 rpm to 2,000 rpm. It’s mated to a 10-speed automatic thus giving the regular Ranger the same 3,500-kg towing capacity.

The new 2.0-liter twin-turbo 4-cylinder diesel is expected to replace the 3.2-liter inline-5 engine, but the 2.2-liter 4-cylinder making 158 horsepower and 385 Nm of torque will continue to power lower-end models.

Like its Ranger sibling, the Everest also gets the Ranger Raptor’s 2.0-liter twin turbo 4-cylinder EcoBlue engine. This means it also makes the same 210 horsepower and 500 Nm of torque. Hooked up to this is the same 10-speed automatic transmission. Overall, the engine and transmission combination will offer improved drivability, smoothness, and cabin refinement both on- and off-road according to Ford. Fuel economy? 14.49 km/L based on Ford’s internal tests.

Also like the Ranger, the Everest gets new suspension geometry for improved ride and comfort along with Active Noise Cancellation for models equipped with the bi-turbo diesel. Ford claims it’s quieter than the 3.2-liter inline-5.

The 2019 Everest is distinguishable by its new grille and new alloy wheel designs while inside, the cabin features more soft-touch materials and SYNC 3 coming as standard with Apple Car Play and Android Auto. Other upgrades follow the Ranger’s path: automatic emergency braking with pedestrian detection, hands-free tailgate, and Active Park Assist.
at 4:09 PM