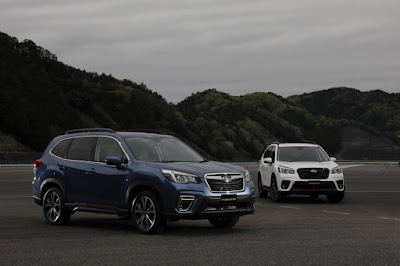 With its Subaru Global Platform designed to take on a hybrid drivetrain from the get-go, Subaru is wasting no time implementing electric-hybrid assist on their vehicles. The first one to benefit from this new technology is the all-new Forester.

The North American market (and likely some global markets) may be getting a 2.5-liter FA25 engine with 182 horsepower and 240 Nm of torque, but Japan, a market that loves hybrids is giving its 2.0-liter direct-injection a small electric boost.

Fitted to its top-of-the-line Forester, the new engine, dubbed e-Boxer, this engine delivers 145 horsepower and 188 Nm from its gasoline powerplant and an additional 13.6 horsepower and 65 Nm of torque from its AC synchronous motor. A lithium-ion battery keeps the additional weight down equating to acceleration performance equaling the regular 2.5-liter with up to 27 percent better fuel efficiency.

Naturally, Subaru has tweaked the X-Mode and SI-Drive system to better suit the hybrid set-up.

Just like the North American market model, the Japanese Domestic Market Forester gets EyeSight and Driver Monitoring System which uses facial recognition technology to detect a sleepy and/or inattentive driver. The same system can also automatically adjust seat position, door mirror angle, and climate control system to suit each registered driver. It can also detect unauthorized driving (such as in a stolen vehicle).

Unique to the Japan market, the Forester gets automatic door locks and a smart rear-view mirror wherein a camera replaces the traditional mirror offering an unobstructed view of the back even if the rear quarters is packed full.

Although Subaru’s Philippine distributor, Motor Image, has remained mum about the 2018 Forester’s potential Philippine specs, the regional launch is already looming near. With a regional launch slated for the second half of 2018, here’s hoping the market will get the e-Boxer variant (it does get a 50 percent reduction in excise tax; so it may mean a cheaper Forester).
at 9:46 AM