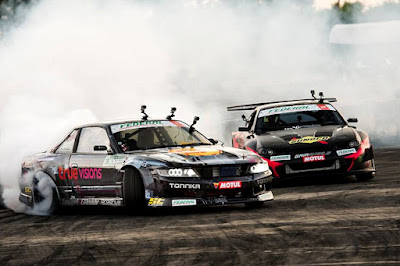 The Federal Tyres King of Nations ProSeries, the biggest and most highly anticipated international drifting championship in the world, will hold its Philippine Leg this Friday, May 25 to Sunday, May 27, 2018 at the the Clark International Raceway in Clark, Pampanga.

Expected to dominate the tarmac are Charles Ng from Hong Kong, who is leading the Asia ProSeries, Daigo Saito from Japan, and Keng Ptt from Thailand. They were all in a tight battle in the recent King of Nations Round 3 and King of Asia Round 2, which was held at Pathum Thani in Thailand, while Filipino pride will be bannered by the gutsy 19-year-old Luis Gono, veteran David Feliciano and king of bodykits Atoy Llave.

The organizers have scheduled a competition for local drifting amateurs on Friday, the 25th, while the Pros will see action on Saturday and Sunday, the 26th and 27th. Gates will open at 8:00 a.m. with an admission fee of P 100.00. 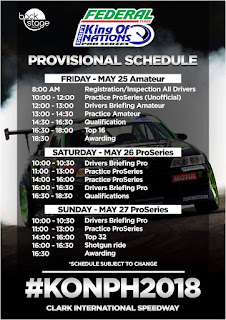