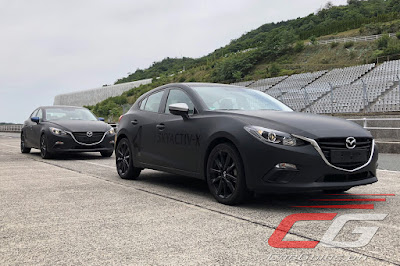 Tucked behind the current-generation body and the matte black paint job lurks the all-new 2019 Mazda3. Slated for market release sometime between April 2019 and March 2020, it not only marks the fourth-generation model to carry the zoom-zoom banner in the compact car segment, but it also represents the biggest gamble for Mazda.

As the rest of the automotive world moves ever close to electrification, Mazda is pushing forward with the development of the internal combustion engine, relying only on electrification if the energy source is generated through clean or renewable ways. The result is Skyactiv-X, an engine that combines the best traits of a gasoline engine with that of diesel engine.

Explaining how Skyactiv-X works requires a lengthy and technical explanation, but the long and short of it is this: it’s Mazda’s answer to create the world’s first viable compression combustion gasoline engine using the sparkplug as a control mechanism. Calling it SPCCI or Spark plug Controlled Compression Ignition, this new engine is said to deliver the same level of performance as the current 2.5-liter Skyactiv-G (188 horsepower and 230 Nm of torque) while returning 30 percent better fuel efficiency than the current 2.0-liter motor. It can run on fuel ranging from 91 octane and up and emissions standards from Euro-4 upward.

As with any new piece of technology, there are some apprehensions from how it responds to how it sounds. Thankfully, Mazda’s quest for efficiency doesn’t come with any compromises that would threaten the brand’s zoom-zoom image. While some tiny work needs to be done to clean up its aural quality, more importantly, the entire package works.

With an iPad mounted at the center console to indicate which ignition operation is in place, an assumption is that performance would sag any time Skyactiv-X enters compression ignition mode. However, that doesn’t seem to be the case; it remains perfectly tractable. What’s more, the engine switches over to conventional spark ignition during high engine load. Simulating varied road speeds on the race track, it’s quite clear that Mazda’s engineers have managed the switchover between the two ignition types quite well. The entire process is seamless with zero vibrational cues.

Admittedly, there’s a diesel-like chatter whenever the engine transitions from one mode to the other. It’s a lot less noticeable in manual transmission guise, but when paired with the automatic, the stuttering tends to linger, especially when the engine spins at low rpm. This, according to Mazda, will be rectified closer to production.

Driven back-to-back with the current Mazda3 2.0-liter Skyactiv-G, the Skactiv-X prototype does have a flatter torque curve, resulting in impressive off-the-line feel. It doesn’t have the same urgency as a diesel-powered engine, but it does stay on point, pulling strongly until the needle passes 4,000 rpm; only then does the performance starts to taper off a bit. Still, it remains rev-happy. And since it remains efficient across a wider range of engine speeds, the gearbox, at least for the automatic, hunts less. It commits to a gear and locks on, contributing to the prototype’s sharper responses, especially at city speeds.

Fixing the Skyactiv-X’s weird powertrain noises will be critical, because the prototype, running on a brand-new platform dubbed Skyactiv Vehicle Architecture is noticeably quieter than the current model. It’s also way more composed, pliant, and refined even on bumpy surfaces. The steering does feel slower around the center, but it does feel more linear and precise, even at moderate or high speeds.

With its design yet to be finalized, one could surmise that the all-new Mazda3 is still some ways off. However, Mazda’s enthusiasm to share its latest engineering breakthrough speaks volumes of what they’re trying to achieve. As the first model in their seventh-generation line-up, the Hiroshima-based carmaker known for defying conventions wants to start off the deep-end. As one of their global best-sellers alongside the CX-5, they cannot afford to get things wrong with the 2019 Mazda3. It’s a big gamble, but it’s also one that comes with huge rewards. Thankfully for Mazda, the odds look to be in their favor.